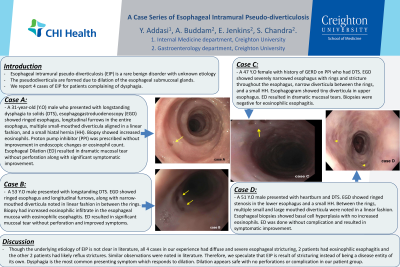 Introduction: Esophageal intramural pseudo-diverticulosis (EIP) is a rare benign disorder with unknown etiology. It was first described by Mendl et al. in 1960. The pseudodiverticula are formed due to dilation of the esophageal submucosal glands. We report 4 cases of EIP for patients complaining of dysphagia.

Case Description/Methods: A: A 31-year-old (Y.O) male who presented with longstanding dysphagia to solids (DTS), esophagogastroduodenoscopy (EGD) showed ringed esophagus, longitudinal furrows in the entire esophagus, multiple small-mouthed diverticula aligned in a linear fashion, and a small hiatal hernia (HH). Biopsy showed increased eosinophils. Proton pump inhibitor (PPI) was prescribed without improvement in endoscopic changes or eosinophil count. Esophageal Dilation (ED) resulted in dramatic mucosal tear without perforation along with significant symptomatic improvement.
B: A 53 Y.O male presented with longstanding DTS. EGD showed ringed esophagus and longitudinal furrows, along with narrow-mouthed diverticula noted in linear fashion in between the rings. Biopsy had increased eosinophilic infiltrate in the esophageal mucosa with eosinophilic esophagitis. ED resulted in significant mucosal tear without perforation and improved symptoms.
C: A 47 Y.O female with history of GERD on PPI who had DTS. EGD showed severely narrowed esophagus with rings and stricture throughout the esophagus, narrow diverticula between the rings, and a small HH. Esophagogram showed tiny diverticula in upper esophagus. ED resulted in dramatic mucosal tears. Biopsies were negative for eosinophilic esophagitis.
D: A 51 Y.O male presented with heartburn and DTS. EGD showed ringed stenosis in the lower esophagus and a small HH. Between the rings, multiple small and large mouthed diverticula were noted in a linear fashion. Esophageal biopsies showed basal cell hyperplasia with no increased eosinophils. ED was done without complication and resulted in symptomatic improvement.

Discussion: Though the underlying etiology of EIP is not clear in literature, all 4 cases in our experience had diffuse and severe esophageal stricturing, 2 patients had eosinophilic esophagitis and the other 2 patients had likely reflux strictures. Similar observations were noted in literature. Therefore, we speculate that EIP is result of stricturing instead of being a disease entity of its own. Dysphagia is the most common presenting symptom which responds to dilation. Dilation results in significant mucosal tears but full thickness perforation is rare.


Table: Overview of clinical, endoscopic, and histologic findings of the described cases.