P1120 - Isolated Melanoma to Pancreas in the Context of Myeloproliferative Neoplasm: A Rare Occurrence 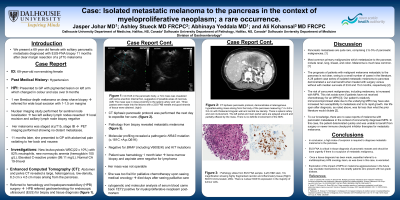 Case Description/Methods: A healthy 69 year old female presented to her family physician with a pigmented lesion on her left lateral arm which had changed in colour and size over 9 months; a deep shave biopsy revealed melanoma. Subsequent local excision and axillary lymph node biopsy were negative. Her melanoma was staged at IB. She had no clinical evidence of recurrence in follow-up 9 months later.

11 months after treatment, she presented with abdominal pain radiating to her back and associated nausea. Outpatient blood work revealed a new leukocytosis of 22 x 109/L with 82% neutrophils and new normocytic anemia (hemoglobin 105 g/L). C-reactive protein levels were elevated (99.11 mg/L). CA 19-9 levels were normal. A CT of her abdomen and pelvis revealed a large, heterogenous, low-density, 6.3 x 4.5 cm mass arising from the pancreas suspicious for primary pancreatic malignancy or lymphoma. There was no evidence of metastatic disease. The patient was referred to both hematology and HPB surgery, who subsequently referred her to gastroenterology for urgent endoscopic ultrasound-guided biopsy for tissue diagnosis of this pancreatic mass. (figure 1).

The pathology was consistent with metastatic melanoma and molecular profiling revealed a pathogenic NRAS mutation (c.181C >A;p.Q61K). There was no evidence of BRAF (including V600E/K) or KIT mutations.

The patient concurrently had a bone marrow biopsy and aspirate which were negative for lymphoma. However, she did have TET2 positive myeloproliferative neoplasm that was identified postmortem.

Her metastatic melanoma mass was not amenable to resection, and the patient was referred to medical oncology. Unfortunately, she deteriorated quickly and was deemed too frail to receive palliative chemotherapy. She was referred to palliative care and passed away several days later.

Discussion: This case highlights a rare finding in isolated melanoma metastasis to the pancreas that may have been accelerated by the patient being immunocompromised by a concurrent myeloproliferative neoplasm. A high index of suspicion must be raised in patients with abdominal symptoms and melanoma history, particularly if they have an underlying immunocompromised state, as the therapeutic window for these patients is narrow. Referral for biopsy, typically endoscopic ultrasound-guided, is critical in this population to establish the diagnosis and guide management.

Figure: Figure 1: On EUS in the pancreatic body, a 7cm mass was visualized with some anechoic internal foci, suggestive of possible areas of necrosis. (a) The mass was in close proximity to the splenic artery and vein. Three passes were made into the lesions with a 22G FNB needle and good strands of tissue were obtained. (b)