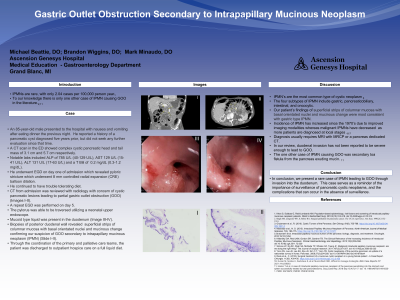 Introduction: An 85-year-old male presented to the hospital with nausea and vomiting after eating dinner the previous night. Upon endoscopic evaluation, he was found to have gastric outlet obstruction (GOO) secondary to intrapapillary mucinous neoplasm (IPMN).

Case Description/Methods: An 85-year-old male presented to the hospital with nausea and vomiting after eating dinner the previous night.

He underwent esophagogastroscopy on day one of admission which revealed solid and liquid food throughout the esophagus and stomach as well as pyloric stricture. The food was removed and pyloric stricture dilation was attempted with 8 mm CRE balloon. He continued to have trouble tolerating diet. A repeat EGD was performed on day 5. The pylorus was traversed utilizing a neonatal upper endoscope. Mucoid type liquid was present in the duodenum and abnormal mucosa located on the posterior wall which was biopsied and revealed superficial strips of columnar mucosa with basal orientated nuclei and mucinous change confirming our suspicion of GOO secondary to IPMN (Image 1B-D). The patient was discharged to outpatient hospice care on a full liquid diet.

Discussion: IPMNs are rare, with only 2.04 cases per 100,000 person year1 Unlike pancreatic adenocarcinoma where GOO has been shown to occur in up to 20% of cases, to our knowledge there is only one other case of IPMN causing GOO.2,11

IPMN’s are at risk for malignant transformation if they involve the main pancreatic duct, have presence of jaundice or obstruction, greater than 3 cm and/or they have a solid component to the cyst.4,5 The four subtypes include gastric, pancreaticobiliary, intestinal, and oncocytic. Our patient’s pathologic findings were most consistent with gastric type.

Incidence of IPMN has increased since the 1970’s likely due to improved imaging modalities.6 Malignant IPMNs have decreased in frequency as more patients are diagnosed at local stages.7 Diagnosis usually requires MRI or pancreas dedicated CT. Local invasion predominantly occurs in the biliary ducts or the duodenum.8-10 In our review, duodenal invasion has not been reported to be severe enough to lead to GOO.