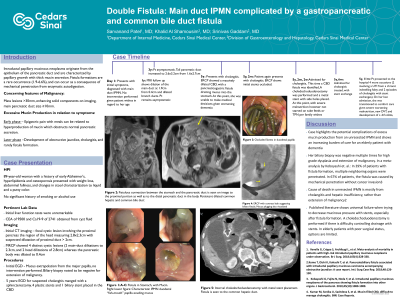 Introduction: IPMN originates from the epithelium of the pancreatic duct, characterized by papillary growth with thick mucin secretion. Worrisome features include mass lesions of >30 mm, enhanced solid components, lesions with abundant papilla formation (mural nodules), and a main pancreatic duct size ≥10 mm. We present a case of a main-duct IPMN complicated by a pancreaticogastric fistula.

Case Description/Methods: An 89-year-old female with a history of mild dementia and osteoporosis presented with weight loss, abdominal fullness, and change in stool characterization to a liquid and putty color. Further workup with MRCP showed 4 distinct cystic lesions involving 2 saccular dilitations in the distal main pancreatic duct measuring 2.3cm and 2 adjacent cysts in the pancreatic head measuring 2.8cm. The pancreatic body was dilated to 0.4cm and EGD at this time showed mucus extravasation from the major papilla, with cyst fluid showing CEA of 9500 and Ca19-9 of 2741. The patient declined surgery given her age and chose to follow with serial imaging.

The patient remained asymptomatic until 5 years post-diagnosis when presented with isolated fevers to her physician and found to have hyperbilirubinemia and cholangitis. ERCP showed a massively dilated CBD to 2cm, with a pancreaticogastric fistula draining mucus into the stomach. A sphincterectomy was performed with 4 plastic stents and 1 pigtail biliary stent placed in the CBD. The patient tolerated the procedure well, and new MRI imaging of the abdomen showed decreased pancreatic ductal dilatation, new communication to the stomach with the pancreatic duct both proximally and distally from the head and body, as well as multiple new outpouchings of the stomach and duodenum with suggestion of fistulous connections between each of several additional smaller cystic areas. Biopsies did not demonstrate spread of malignancy.

Discussion: This case demonstrates the potential course of non-surgical and symptomatic care of IPMN. Mean survival times in patients with pancreatobiliary fistulas associated with IPMNs who underwent surgical resection vs. no surgery were 47.9 and 10.4 months. The patients fistula occurred as a consequence of mechanical penetration and autodigestion from the excessive pressure of mucin-filled ducts over time, which may have relieved pressure and help the patient be asymptomatic for so long. The case also shows that multiple fistulas can develop and endoscopic findings around the fistula opening do not adequately relate to spread of disease. 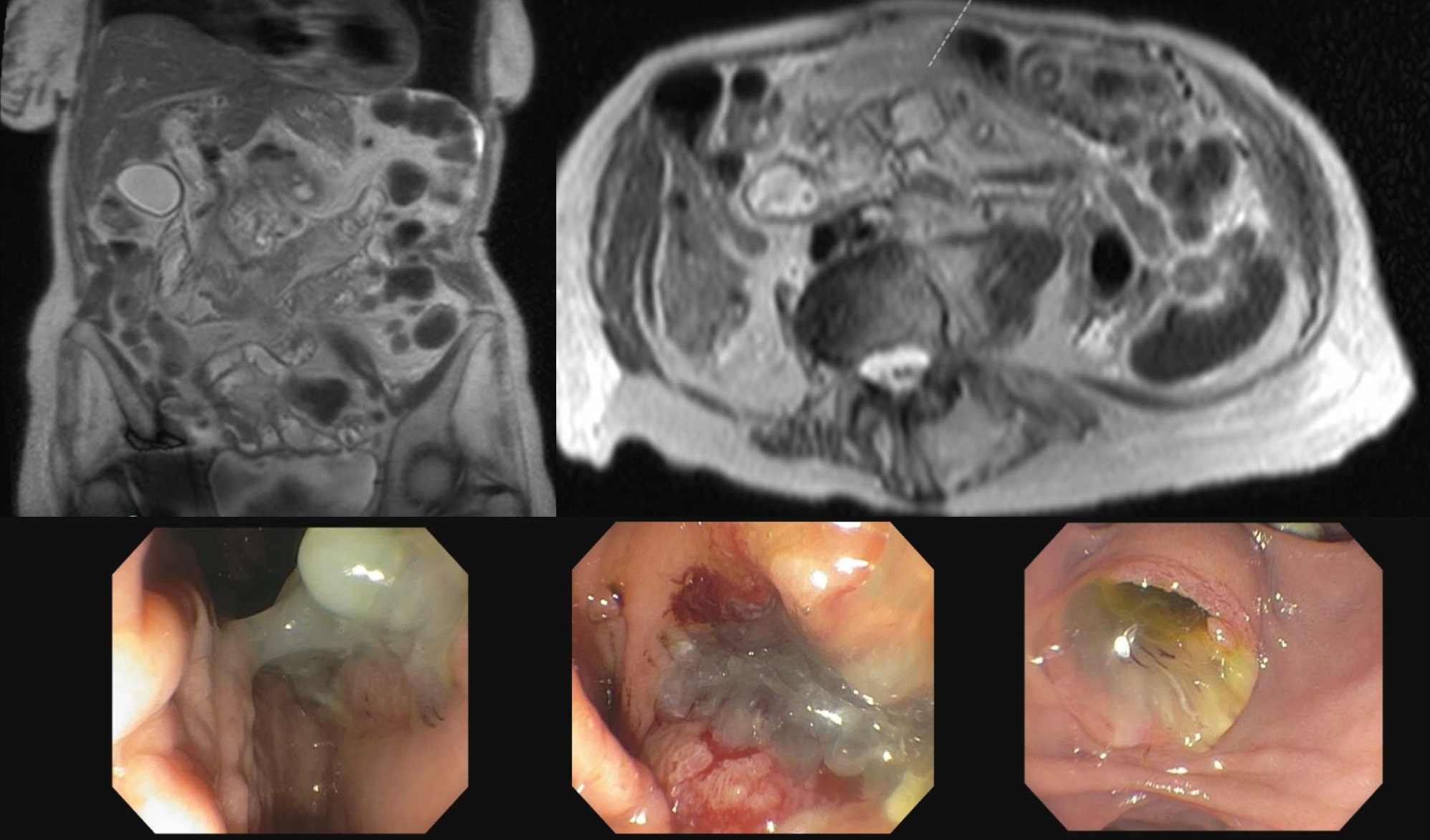 Figure: MRI - Findings showing decreased pancreatic ductal dilatation with now communicationto the stomach with the pancreatic duct both proximally and distally from the head and body. Also, multiple outpouchings of the stomach and duodenum with suggestion of fistulous connections between each with several additional smaller cystic areas in this location that are new.
ERCP - Gastric fistula with main duct IPMN with extrusion of thick mucus into the stomach. The major papilla appeared to be bulging, and exuding mucin.