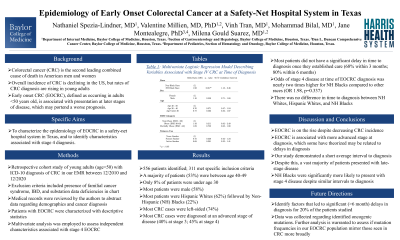 Introduction: Colorectal cancer (CRC) is the second leading cause of cancer-related deaths in American men and women combined. While overall incidence and mortality of CRC have seen consistent declines over the last several decades, rates of CRC in young adults have been rising. Many patients with early onset CRC (EOCRC) present at late stages of disease, including a high proportion who present with stage 4 cancer when the prognosis is poor. The objective of this study is to characterize the epidemiology of EOCRC in a safety-net hospital system and identify characteristics associated with Stage 4 diagnosis.

Methods: We conducted a retrospective cohort study of young adults (age< 50) with CRC (based on ICD-10 code diagnosis) between 12/2010 and 12/2020. Patients were excluded if there were significant data deficiencies in the chart, or if they had a history of inflammatory bowel disease or a familial cancer syndrome. Medical records were reviewed to abstract data regarding demographics and cancer diagnosis. Patients with EOCRC were characterized with descriptive statistics. Multivariable analysis was used to assess characteristics independently associated with stage 4 EOCRC.

Results: Of 556 patients identified, 311 met the specified inclusion criteria. Over half the patients were between ages 40-49 (53%), with only 8% under age 30. Most patients were male (58%). Most patients were of Hispanic descent (62%), followed by Non-Hispanic (NH) Blacks (22%). A majority of CRC cases were left-sided (74%). Most cases were diagnosed at an advanced stage of disease, with 40% of cases diagnosed at stage 3 and 45% at stage 4. Most patients had a timely diagnosis from presentation (68% within 3 months; 80% within 6 months). In multivariable analyses, the odds of stage 4 EOCRC diagnosis was nearly two times higher among NH Blacks compared to all other races (OR 1.98, p=0.017). There was no difference in time to diagnosis between NH Whites, Hispanic Whites, and NH blacks (p=0.337).

Discussion: Incidence of EOCRC has been on the rise despite declining overall CRC cases. Patients with EOCRC are often diagnosed at later stages of disease, which has been attributed in part to diagnostic delays. Interestingly, this study demonstrated a short average interval to diagnosis. Despite this, an overwhelming majority of patients were diagnosed with late-stage disease. NH Blacks were significantly more likely to present with stage 4 EOCRC despite similar times to diagnosis. Further research is warranted to elucidate these trends.