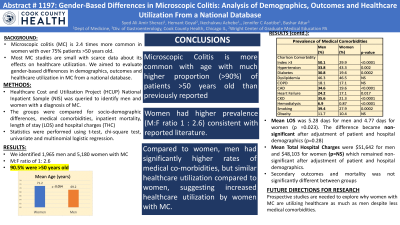 Introduction: Microscopic colitis (MC) is a chronic inflammatory bowel disease diagnosed histologically with a macroscopically normal large bowel. It is 2.4 times more common in women with over 75% patients >50 years old (Gastroenterol Hepatol 2017;13(11):671-5). Most MC studies are small with scarce data about its effects on healthcare utilization. The aim of our study was to evaluate gender-based differences in demographics, outcomes and healthcare utilization in MC from a national database

Discussion: MC is more common with age with much higher proportion ( >90%) of patients >50 years old than previously reported. Women had higher prevalence (M:F ratio 1:2.6). Women with MC were more likely to be white and less likely Hispanic. While men had significantly higher rates of medical co-morbidities than women, it did not translate into higher healthcare utilization, indicating the need to explore why women with MC are utilizing healthcare as much as men despite less medical problems