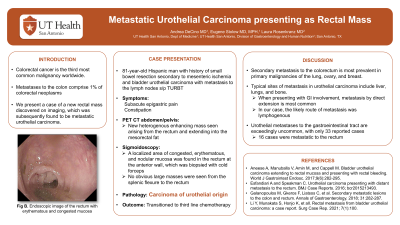 Introduction: Colorectal cancer is the third most common malignancy worldwide. Metastases to the colon comprise 1% of colorectal neoplasms. We present a case of a new rectal mass discovered on imaging, which was subsequently found to be metastatic urothelial carcinoma.

An abdominopelvic CT was performed for restaging following chemotherapy, and revealed a new heterogeneous enhancing mass in the rectum with extension into the mesorectal fat. The patient underwent flexible sigmoidoscopy with findings of erythematous and congested rectal mucosa without mass or polyps (Figure 1). Biopsy was consistent with carcinoma of urothelial origin, and he was transitioned to third-line chemotherapy due to cancer progression.

Discussion: Secondary metastasis to the colorectum is rare, but most prevalent in primary malignancies of the lung, ovary, and breast. Urothelial carcinoma is a malignancy of the transitional cells of the bladder. Typical sites of metastasis include liver, lungs, and bone. Urothelial metastases to the gastrointestinal tract are exceedingly uncommon, with only 33 reported cases in one literature review from 2017. Sixteen of those were metastatic to the rectum.

Most patients with metastasis to the gastrointestinal tract present with gastrointestinal symptoms, though up to one-third are asymptomatic and often found on autopsy. Though imaging findings of gastrointestinal masses are concerning for primary malignancy, it is important to consider other causes, such as secondary metastasis. 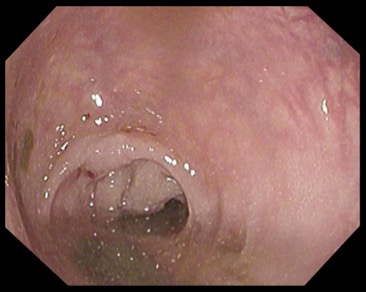 Figure: Figure 1. Endoscopic image of the rectum with erythematous and congested mucosa