P1251 - Where the Sun Don’t Shine: A Case of Primary Malignant Melanoma of the Rectum 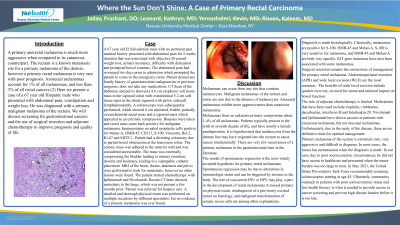 Introduction: A primary anorectal melanoma is much more aggressive when compared to its cutaneous counterpart. A primary rectal melanoma is very rare with poor prognosis. Anorectal melanomas account for 1% of all melanomas, and less than 3% of all rectal cancers. This is a case of a 67 year old Hispanic male who was diagnosed with a primary malignant melanoma of the rectum. We will discuss screening for gastrointestinal cancers, the use of surgical resection and chemotherapy to improve prognosis and quality of life, as well as increased screening for patients with poor medical literacy.

Case Description/Methods: A 67 year old undocumented El Salvadorian male who had never seen a physician presented with abdominal pain for 2 weeks duration that was associated with objective 20 pound weight loss, urinary hesitancy, difficulty with defecation. CT Scan of the abdomen and pelvis showed a exophytic soft tissue mass in the sigmoid colon with pelvic sidewall lymphadenopathy. A colonoscopy showed a 6 cm ulcerated, friable rectal mass and a sigmoid mass which appeared as an extrinsic compression. Biopsies came back positive for malignant melanoma. Immunostains revealed neoplastic cells positive for Melan-A, HMB-45, CD117, S-100, Vimentin, Bcl-2, Ki-67 and MITF-1. The colonic mass was adhered to the anterior wall and was unresectable. Full body MRI was performed to look for metastasis, but nothing was found. The patient started chemotherapy but ultimately after three failed cycles patient was referred for hospice care. A detailed and thorough physical exam was performed on multiple occasions by different specialists, but no evidence of a primary melanoma was ever found.

Discussion: Melanomas from an unknown primary compromise about 1-4% of all melanomas. Patients typically present in the sixth to seventh decade of life, and have mostly a female predisposition. It is hypothesized that melanocytes from the dentate line may have migrated into the rectum to cause cancer intraluminally. The model of spontaneous regression is the most widely accepted hypothesis for primary rectal melanomas.An unrecognized or missed primary on physical exam, misdiagnosis of a previously excised tumor on histology, and malignant transformation of ectopic nevus cells are among other explanations. Wide local excision remains the cornerstone for treatment. Role of chemotherapy has not been studied due to the rarity of primary rectal melanoma. Increasing patient education, outreach and increasing screening are ways to combat this deadly disease. 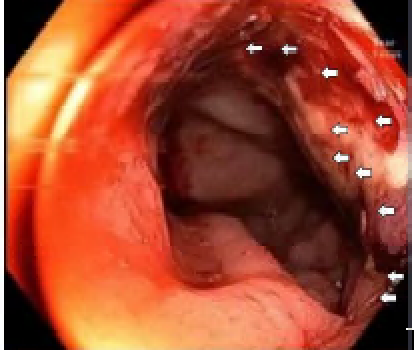