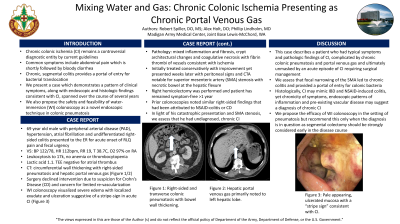 Introduction: Colonic ischemia (CI) is responsible for ~20% of acute lower gastrointestinal bleeds. It typically occurs in elderly patients with comorbidities due to non-occlusive, low flow states. The existence of chronic CI is controversial by current guidelines yet we present a case of chronic CI supported by histologic and endoscopic findings over several years. We also demonstrate the safety of water-immersion colonoscopy in the setting of colonic pneumatosis.

Case Description/Methods: A 69 year old male with peripheral arterial disease (PAD), atrial fibrillation and undifferentiated right-sided colitis presented to the ER for acute RLQ pain and fecal urgency. He was febrile and tachycardic with leukocytosis but no lactic acidosis. CT showed circumferential wall thickening with right-sided pneumatosis and hepatic portal venous gas (Figure 1A/B). Surgery declined intervention due to suspicion for Crohn’s Disease (CD) and concern for limited re-vascularization of his colon. This prompted water-immersion colonoscopy and visualization of severe edema with localized exudate and ulceration suggestive of a stripe-sign in acute CI (Figure 1C). Histology revealed mixed inflammation and fibrosis, crypt architectural changes and coagulative necrosis with fibrin thrombi of vessels consistent with ischemia. He improved with conservative treatment yet presented weeks later with peritoneal signs and CT notable for superior mesenteric artery (SMA) stenosis with necrotic bowel. Right hemicolectomy was performed and patient has remained symptom-free >1 year. A review of prior colonoscopies noted similar right-sided findings that had been attributed to NSAID-colitis or CD. Given his catastrophic presentation and SMA stenosis, we assess that he had undiagnosed, chronic CI.

Discussion: Chronic CI remains controversial given a lack of standardized diagnostic criteria. This case describes a patient with typical symptoms and pathologic findings of CI spanned over several years and unmasked by an acute worsening requiring surgery. His SMA stenosis suggests a different pathophysiology than typical of low-flow states in acute CI. Histologically, CI may mimic IBD and NSAID-induced colitis, yet chronicity of symptoms, endoscopic patterns of inflammation and pre-existing vascular disease may lead to a diagnosis of chronic CI. We have also documented the safety of gentle, water-immersion colonoscopy in the setting of pneumatosis. We recommend this only when the source is in question as early colectomy should be strongly considered.