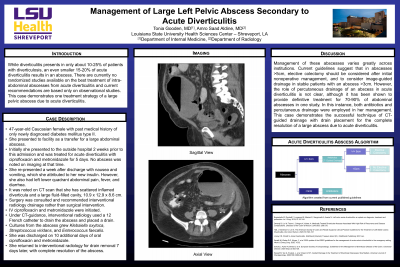 Case Description/Methods: The patient is a 47-year-old Caucasian female with past medical history of only newly diagnosed diabetes mellitus. She presented to our facility as a transfer for a large abdominal abscess. When she initially presented to the outside hospital, she was two weeks recovered from acute sigmoid diverticulitis, where no abscess was noted on imaging. During that first admission, she was treated with five days of ciprofloxacin and metronidazole and discharged with the same oral regimen. She re-presented with nausea and vomiting, which she attributed to her new insulin. However, she also had left lower quadrant abdominal pain, and diarrhea. It was noted on CT scan that she has scattered inflamed diverticula and a large fluid-filled cavity, 10.9 x 12.9 x 8.6 cm. Surgery was consulted and recommended IR drainage rather than surgical intervention. IV ciprofloxacin and metronidazole were initiated. Interventional radiology (IR) was consulted for drainage of the abscess. Under CT-guidance, IR drained the abscess and placed a drain. Cultures from the abscess grew Klebsiella oxytoca, Streptococcus viridans, and Enterococcus faecalis. She was discharged on 10 additional days of oral ciprofloxacin and metronidazole. She returned to IR for drain removal 7 days later, with complete resolution of the abscess.

Discussion: Management of these abscesses varies greatly across institutions. Current guidelines suggest that in abscesses >5cm, elective colectomy should be considered after initial nonoperative management, and to consider image-guided drainage in stable patients with an abscess >3cm. However, the role of percutaneous drainage of an abscess in acute diverticulitis is not clear, although it has been shown to provide definitive treatment for 70-90% of abdominal abscesses in one study. In this instance, both antibiotics and percutaneous drainage were employed in her management. This case demonstrates the successful technique of CT-guided drainage with drain placement for the complete resolution of a large abscess due to acute diverticulitis. 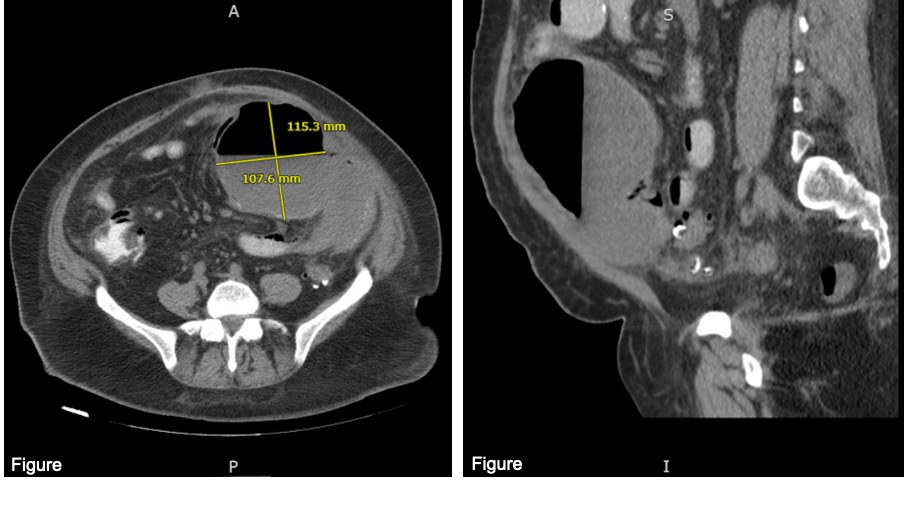