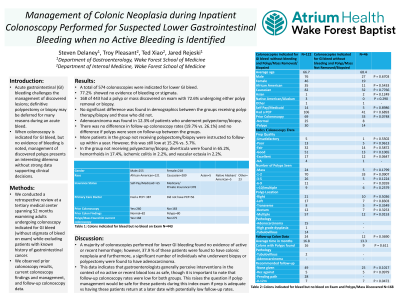 Introduction: Gastrointestinal (GI) bleeding challenges the management of discovered masses and polyps; definitive polypectomy or biopsy may be deferred for many reasons during an acute bleed. When colonoscopy is indicated for GI bleed, but no evidence of bleeding is noted, management of discovered polyps presents an interesting dilemma without strong data supporting clinical decisions.

Methods: We conducted a retrospective review at a tertiary medical center spanning 52 months examining adults undergoing colonoscopy indicated for GI bleed (without stigmata of bleed on exam) while excluding patients with known history of gastrointestinal cancer. We observed prior colonoscopy results, current colonoscopy findings and management, and follow-up colonoscopy data.

Results: A total of 574 colonoscopies were indicated for lower GI bleed. 443 showed no evidence of active/recent blood loss. 168 of 443 had a polyp or mass discovered on exam with 72.6% undergoing either polyp removal or biopsy. No significant difference was found regarding race, gender, insurance status, PCP status, prior colonoscopy rate, number of polyps, or prep quality between the groups receiving polyp therapy/biopsy and those who did not. Adenocarcinoma was found in 12.3% of patients who underwent polypectomy/biopsy. There was no difference in follow-up colonoscopy rates (19.7% vs. 26.1%) and no difference if polyps were seen on follow-up between the groups. More patients in the group not receiving polypectomy/biopsy were instructed to follow-up within a year. However, this was still low at 15.2% vs. 5.7%. In the group not receiving polypectomy/biopsy, diverticula were found in 65.2%, hemorrhoids in 17.4%, ischemic colitis in 2.2%, and vascular ectasia in 2.2%.

Discussion: A majority of colonoscopies performed for lower GI bleeding found no evidence of active or recent hemorrhage; however, 37.9 % of these patients were found to have colonic neoplasia and furthermore, a significant number of individuals who underwent biopsy or polypectomy were found to have adenocarcinoma. This data indicates that gastroenterologists generally perceive interventions in the context of no active or recent blood loss as safe, though it is important to note that follow-up colonoscopy rates were low for both groups. This raises the question if polyp management would be safe for these patients during this index exam if prep is adequate vs having these patients return at a later date with potentially low follow-up rates.