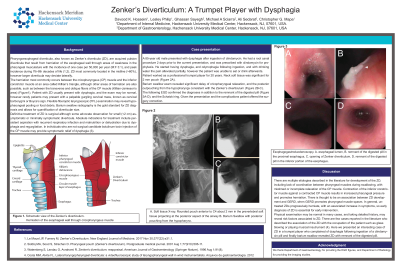 Introduction: Pharyngoesophageal diverticula, also known as ZD, are acquired pulsion diverticula that result from herniation of the esophageal wall through areas of weakness in the pharyngeal musculature with the incidence of one case per 50,000 case per year (M:F 3:1).
The herniation most commonly occurs between the cricopharyngeus muscle and the inferior constrictor muscle at an area called Killian’s triangle. Patients with ZD usually present with dysphagia, and the exam may be normal. Barium swallow radiography is the gold standard for ZD diagnosis and allows for quantification of diverticular size.

Case Description/Methods: A 85-year old male presented with dysphagia after ingestion of clindamycin. He had a root canal procedure 2 days prior to admission, and was prescribed clindamycin for prophylaxis. However, he started having dysphagia, and odynophagia following ingestion of solids, and with drinking water the pain alleviated partially, however the patient was unable to eat or drink afterwards. Patient worked as a professional trumpet player for 20 years. Neck soft tissue was significant for 2 mm pouch. Barium swallow revealed significant delay of cricopharyngeal relaxation, and the posterior outpouching from the hypopharynx consistent with the Zenker’s diverticulum. The following EGD confirmed the diagnosis in addition to the remnant of the digested pill, and the Schatzki’s ring. Given the presentation and the complications, the patient was offered surgical correction.

Discussion: There are multiple etiologies described in the literature for development of the ZD, including lack of coordination between pharyngeal muscles during swallowing, with mistimed or incomplete relaxation of the CP muscle. Contraction of the inferior constrictor muscle against a contracted CP muscle results in increased pharyngeal pressure and promotes herniation.
In general, untreated ZDs progressively herniate, with an associated increase in symptoms, so early diagnosis of ZD is essential for early intervention.
Physical examination may be normal in many cases, and taking detailed history, may reveal risk factors associated to ZD. There are few cases reported in the literature that described the association of the ZD with the occupation of the patient such as glass blowing or playing musical instruments. Here we presented an interesting case of ZD in a trumpet player who complained of dysphagia following ingestion of a clindamycin pill and finally barium swallow revealed ZD with remnant of the digested pill. 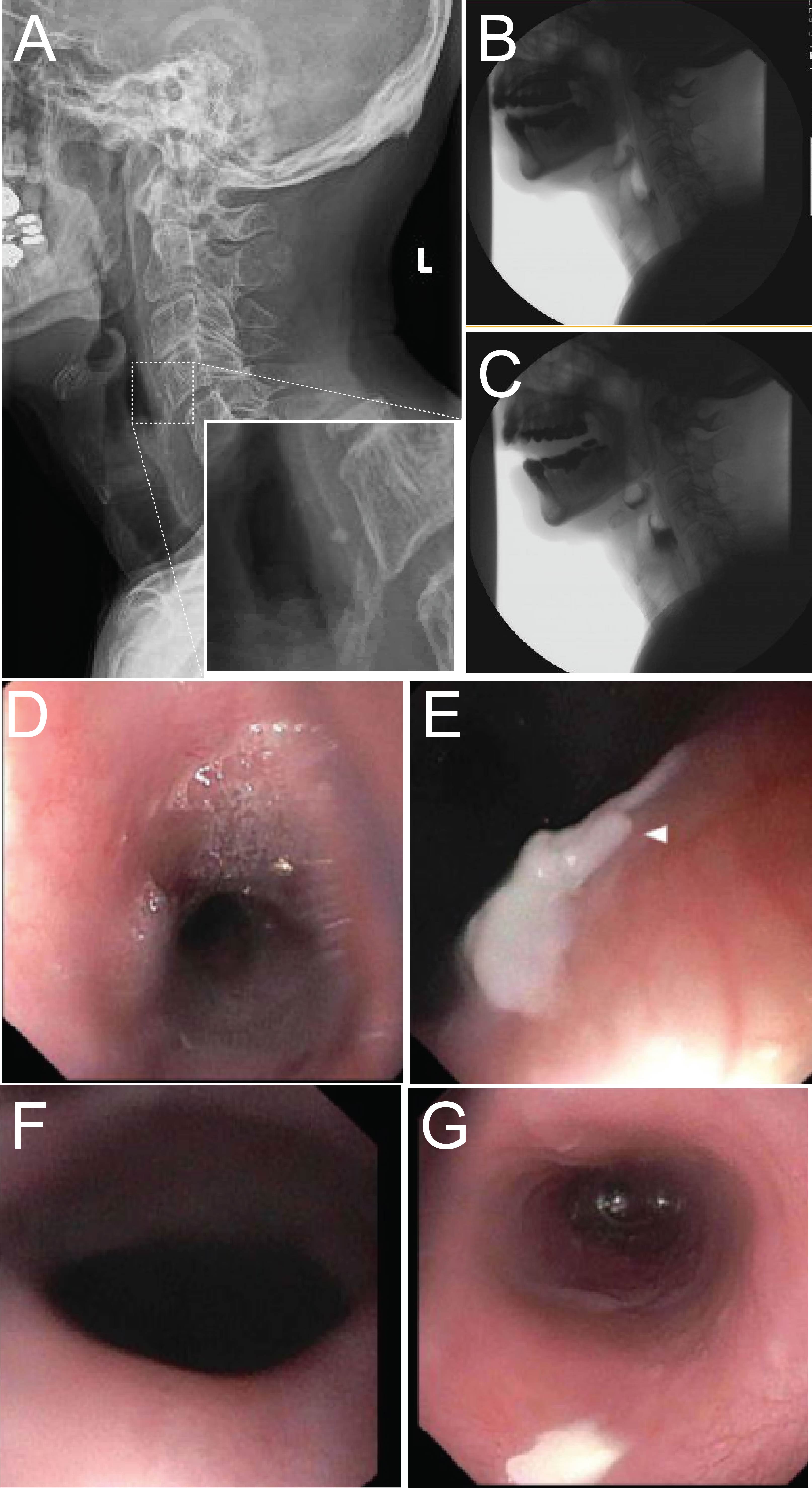 Figure: Figure 1. A. Soft tissue X-ray. Rounded pouch anterior to C4 about 2 mm in the prevertebral soft tissue projecting at the posterior aspect of the airway. B., C Barium swallow with posterior pouching from the hypopharynx.
D. Esophagogastroduodenoscopy: Esophageal lumen, E. Remnant of the digested pill in the proximal esophagus, F. Opening of the Zenker diverticulum, G. Remnant of the digested pill in the inferior portion of the esophagus.