P1408 - Failure to Thrive and Severe Malnutrition Due to a Jest of Nature: Dysphagia Lusoria 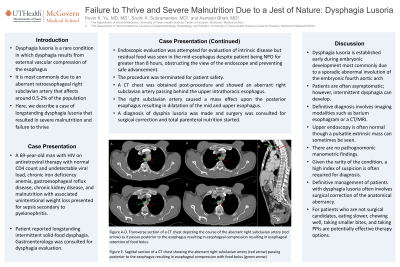 Introduction: Dysphagia Lusoria is a rare condition in which dysphagia results from external vascular compression of the esophagus. Named after lusus naturae, jest of nature, dysphagia lusoria was first documented in 1794. It is most commonly due to an aberrant retroesophageal right subclavian artery that affects around 0.5-2% of the population. Here, we describe a case of longstanding dysphagia lusoria that resulted in severe malnutrition and failure to thrive.

Case Description/Methods: A 69-year-old man with HIV on antiretroviral therapy with normal CD4 count and undetectable viral load, chronic iron deficiency anemia, gastroesophageal reflux disease, chronic kidney disease, and malnutrition with associated unintentional weight loss presented for sepsis secondary to pyelonephritis. While hospitalized, Gastroenterology was consulted for dysphagia evaluation. Patient reported longstanding intermittent solid-food dysphagia. Evaluation was attempted for evaluation of intrinsic disease. Residual food was seen in the mid-esophagus despite patient being NPO for greater than 8 hours, obstructing the view of the scope preventing safe advancement. The procedure was terminated for patient safety. A CT chest was obtained post-procedure and showed an aberrant right subclavian artery passing behind the upper intrathoracic esophagus (Fig 1E). This caused a mass effect upon the posterior esophagus resulting in dilatation of the mid and upper esophagus (Fig 1A-D). A diagnosis of dysphia lusoria was made and surgery was consulted for surgical correction and total parental nutrition started.

Discussion: The pathogenesis of dysphagia lusoria is established early during embryonic development most commonly due to a sporadic abnormal involution of the embryonic fourth aortic arch. Patients are often asymptomatic; however, intermittent dysphagia can develop. Definitive diagnosis involves imaging modalities such as barium esophagram or a CT/MRI. Upper endoscopy is often normal though a pulsatile extrinsic mass can sometimes be seen. There are no pathognomonic manometric findings. Given the rarity of the condition, a high index of suspicion is often required for diagnosis. Management of patients with dysphagia lusoria often involves surgical correction of the anatomical aberrancy. In patients who decline to undergo surgical correction, have mild-moderate symptoms, or are poor surgical candidates, eating slower, chewing well, taking smaller bites, and taking PPIs could be effective therapy options.