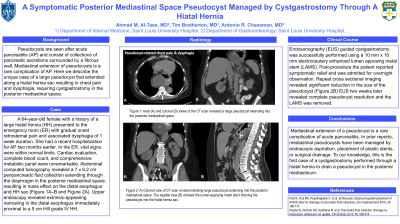 Introduction: Pseudocysts are seen after acute pancreatitis (AP) and consist of collections of pancreatic secretions surrounded by a fibrous wall. Mediastinal extension of pseudocysts is a rare complication of AP. Here we describe the unique case of a large pseudocyst that extended along a hiatal hernia sac resulting in chest pain and dysphagia, requiring cystgastrostomy in the posterior mediastinal space.

Discussion: Mediastinal extension of a pseudocyst is a rare complication of acute pancreatitis. In prior reports, mediastinal pseudocysts have been managed by endoscopic aspiration, placement of plastic stents, or surgical drainage. To our knowledge, this is the first case of a cystgastrostomy performed through a hiatal hernia to drain a pseudocyst in the posterior mediastinum.

Figure: Axial (A) and coronal (B and C) views of the CT scan revealed a large pseudocyst extending into the posterior mediastinal space. The sagittal view (D) showed the lumen-apposing metal stent draining the pseudocyst into the hiatal hernia sac.