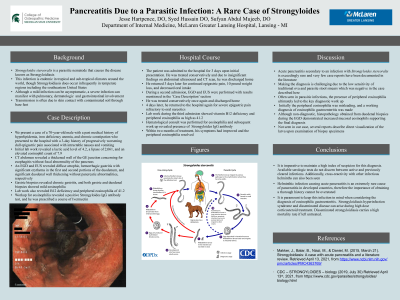 Introduction: Strongyloides stercoralis is a parasitic nematode that causes strongyloidiasis. Transmission to humans is most commonly due to skin contact with contaminated soil. This infection is endemic in tropical and subtropical climates globally though it does occur infrequently in temperate regions including the southeastern United States. Although a mild infection can be asymptomatic, a severe case can manifest with pulmonary, dermatologic, and gastrointestinal involvement heralded by diarrhea, vomiting, cough, rash, and peripheral eosinophilia.

Case Description/Methods: We present a case of a 70 year old man who presented to the hospital after three days of worsening epigastric pain with intractable nausea and vomiting. Lab work revealed a lipase of 2061. A CTA of his abdomen showed a thickened wall of the GE junction without focal abnormality of the pancreas. Subsequently he was admitted for further evaluation of acute interstitial pancreatitis. An abdominal ultrasound was without cholelithiasis and he denied alcohol use. Initial diagnostic work up was unrevealing and on day three he was discharged home with plans for outpatient EGD and EUS. Three days later he returned with worsening epigastric pain, anorexia, and intractable vomiting without clinical evidence of pancreatitis. An EGD and EUS revealed diffuse hemorrhagic gastritis and duodenal mucosal erythema without pancreatic abnormalities. Gastric biopsies revealed chronic inflammation, and both duodenal and gastric biopsies revealed mild eosinophilia. Subsequent lab work up was significant for B12 deficiency and peripheral eosinophilia. Hematology evaluation ensued and parasitic work up yielded a positive Strongyloides IgG antibody. After a two week course of ivermectin he experienced complete resolution of his peripheral eosinophilia, symptoms, and hemorrhagic gastritis.

Discussion: Very few case reports of acute pancreatitis due to Strongyloides stercoralis have been documented in the literature. Making the diagnosis of strongyloidiasis is challenging due to the low sensitivity of traditional ova and parasite stool smears and inability of available serologic tests to discern between active and previous infection. Although non-diagnostic, mucosal eosinophilia from duodenal biopsies is supportive of the diagnosis. Several reports describe direct visualization of larva upon pathologic examination though this is unusual. In summary, lab work, high clinical suspicion, and a thorough patient history can aid clinicians in making a timely diagnosis. 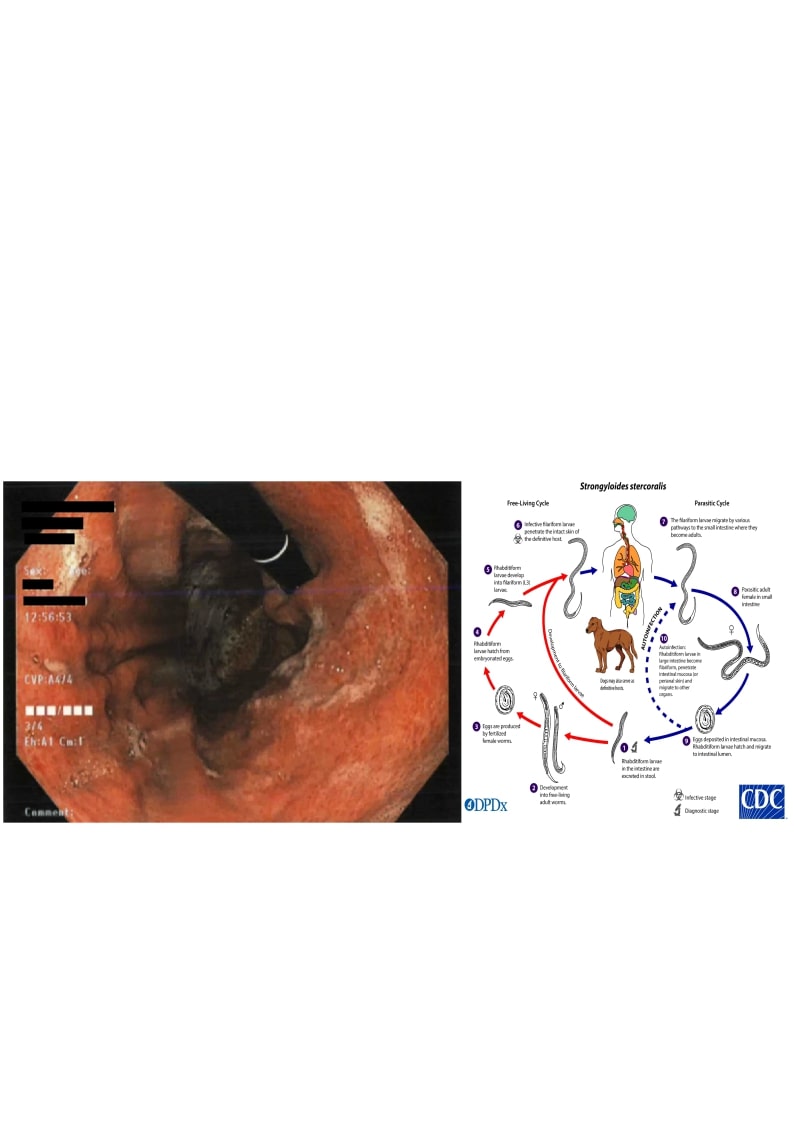