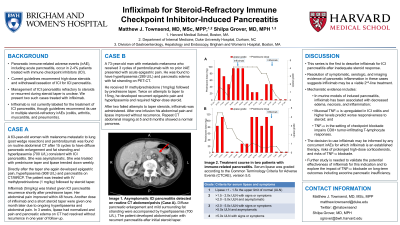 Case Description/Methods: Patient A: A 63-year-old woman with melanoma metastatic to the lung treated with wedge resection and pembrolizumab was found on routine abdominal CT after 15 cycles to have diffuse pancreatic enlargement and fat stranding. She was asymptomatic with hyperlipasemia (700 U/L) consistent with ICI pancreatitis. Lipase trended down weekly on a prednisone taper from 1mg/kg. Directly after the taper she again developed epigastric pain, hyperlipasemia (908 U/L) and pancreatitis on CT/MRCP. The patient was treated with IV methylprednisolone (1 mg/kg) followed by oral steroid taper. Infliximab (5mg/kg) was trialed for ICI pancreatitis given its recurrence shortly following prednisone taper. Her abdominal pain improved within 48 hours. Another dose of infliximab and a short steroid taper were given one month later in the setting of ongoing hyperlipasemia and mild abdominal pain. In 3 weeks lipase had normalized and pain and pancreatic edema on CT had resolved without recurrence (one year of follow up).
Patient B: A 73-year-old man with metastatic melanoma who received 3 cycles of pembrolizumab with no prior irAE presented with acute epigastric pain. He was found to have hyperlipasemia (289 U/L) and pancreatic edema with fat stranding on PET-CT. He received IV methylprednisone (1mg/kg) followed by prednisone taper. Twice on attempts to taper to 15mg, he developed recurrent epigastric pain and hyperlipasemia and required higher-dose steroid. Infliximab was initiated given two failed attempts to taper steroids. After one infusion his abdominal pain and lipase improved without recurrence. Repeat CT abdominal imaging at 5 and 8 months showed a normal pancreas.


Discussion: This series is the first to describe infliximab for ICI pancreatitis after inadequate steroid response. Resolution of symptomatic, serologic, and imaging evidence of pancreatic inflammation in these cases suggests infliximab may be a viable second-line treatment for ICI pancreatitis; further study is needed to validate its potential effectiveness for this irAE. 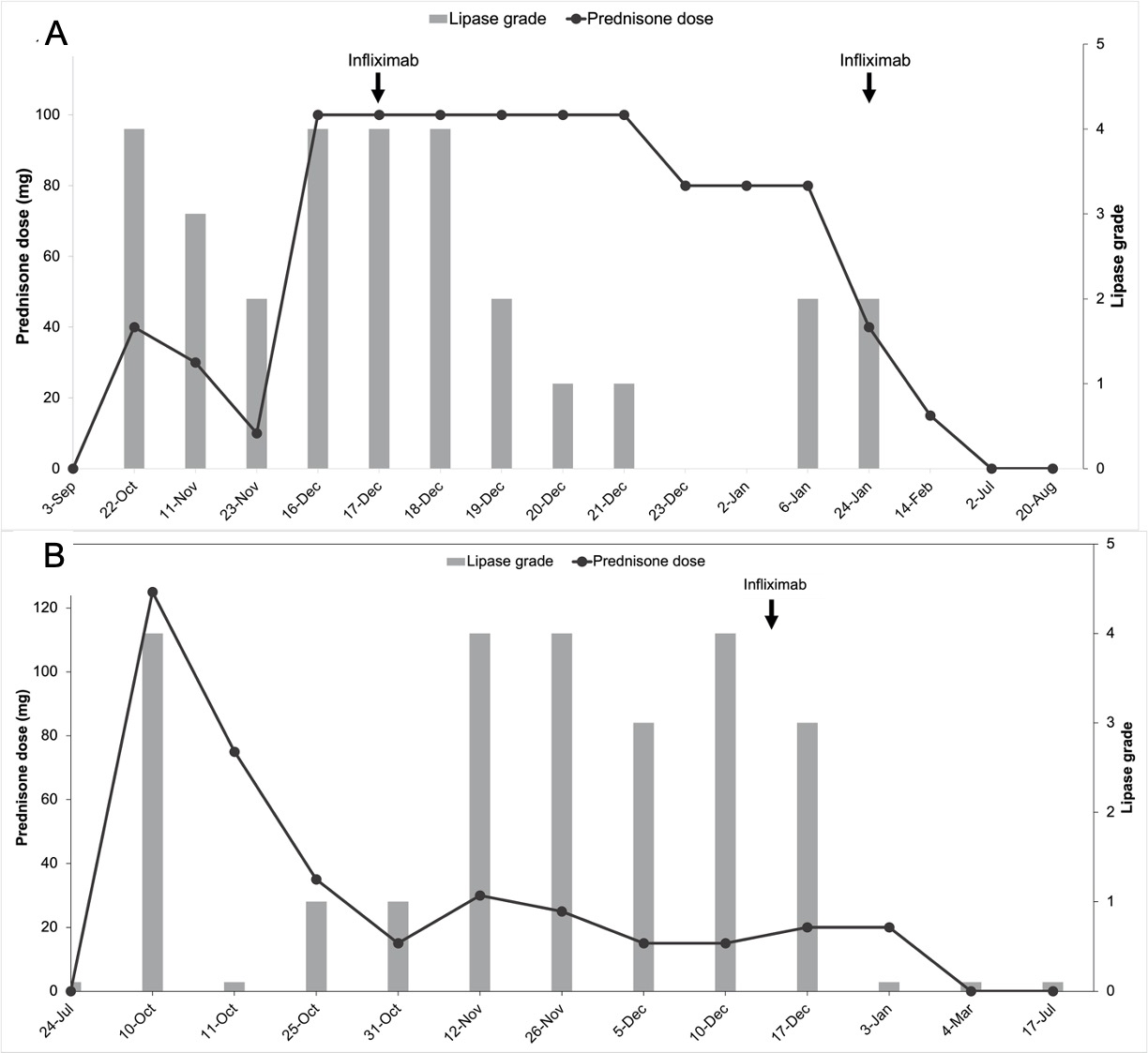