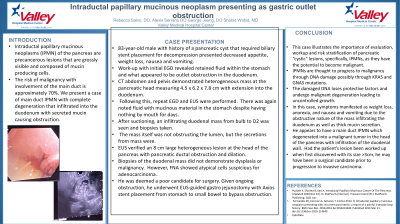 Introduction: Intraductal papillary mucinous neoplasms (IPMN) of the pancreas are precancerous lesions that are grossly visible and composed of mucin producing cells. The risk of malignancy with involvement of the main duct is approximately 70%. We present a case of main duct IPMN with complete degeneration that infiltrated into the duodenum with secreted mucin causing obstruction.

Case Description/Methods: 83-year-old male with history of a pancreatic cyst that required biliary stent placement for decompression for which GI was consulted for decreased appetite, weight loss, nausea and vomiting. Work-up with initial EGD revealed retained fluid within the stomach and what appeared to be outlet obstruction in the duodenum. CT abdomen and pelvis demonstrated heterogeneous mass at the pancreatic head measuring 4.5 x 6.2 x 7.8 cm with extension into the duodenum. Following this, repeat EGD and EUS were performed. There was again noted fluid with mucinous material in the stomach despite having nothing by mouth for days. After suctioning, an infiltrating duodenal mass from bulb to D2 was seen and biopsies taken. The mass itself was not obstructing the lumen, but the secretions from mass were. EUS verified an 8 cm large heterogeneous lesion at the head of the pancreas with pancreatic ductal obstruction and dilation. FNA performed. Biopsies of the duodenal mass did not demonstrate dysplasia or malignancy. However, FNA showed atypical cells suspicious for adenocarcinoma. He was not a candidate for surgery. Given ongoing obstruction, he underwent EUS-guided gastro jejunostomy with Axios stent placement from stomach to small bowel to bypass obstruction.

Discussion: This case illustrates the importance of evaluation, workup and risk stratification of pancreatic “cystic” lesions, specifically, IPMNs, as they have the potential to become malignant. IPMNs are thought to progress to malignancy through DNA damage possibly through KRAS and GNAS mutations. The damaged DNA loses protective factors and undergo malignant degeneration leading to uncontrolled growth. In this case, symptoms manifested as weight loss, anorexia, and nausea and vomiting due to the obstructive nature of the mass infiltrating the duodenum as well as thick mucin secretion. He appears to have a main duct IPMN which degenerated into a malignant tumor in the head of the pancreas with infiltration of the duodenum. Had the patient’s mass been worked up when first discovered, he may have been a surgical candidate prior to progression to invasive carcinoma.