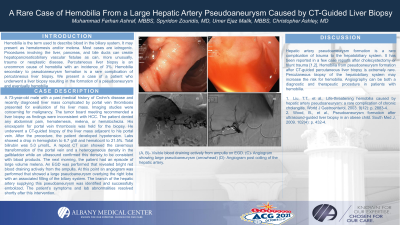 Introduction: Hemobilia is the term used to describe blood in the biliary system. It may present as hematemesis and/or melena. Most cases are iatrogenic. Procedures involving the liver, pancreas, and bile ducts can create hepatopancreaticobiliary vascular fistulae as can, more unusually, trauma or neoplastic disease. Percutaneous liver biopsy is an uncommon cause of hemobilia with an incidence of 3%. Hemobilia secondary to pseudoaneurysm formation is a rare complication of percutaneous liver biopsy. We present a case of a patient who underwent a liver biopsy resulting in the formation of a pseudoaneurysm and eventually hemobilia

Case Description/Methods: A 73-year-old male with a past medical history of Crohn's disease and recently diagnosed liver mass complicated by portal vein thrombosis presented for evaluation of his liver mass. Imaging studies were concerning for malignancy. The tumor board meeting recommended a liver biopsy as findings were inconsistent with HCC. The patient denied any abdominal pain, hematemesis, melena, or hematochezia. His enoxaparin for portal vein thrombosis was held for the biopsy. He underwent a CT-guided biopsy of the liver mass adjacent to his portal vein. After the procedure, the patient developed hypotension. Labs showed a drop in hemoglobin to 6.7 g/dl and hematocrit to 21.5%. Total bilirubin was 5.0 μmol/L. A repeat CT scan showed the cavernous transformation of the portal vein and a heterogeneous density in the gallbladder while an ultrasound confirmed this density to be consistent with blood products. The next morning, the patient had an episode of large volume melena. An EGD was performed that revealed bright red blood draining actively from the ampulla. At this point an angiogram was performed that showed a large pseudoaneurysm overlying the right lobe with an associated filling of the biliary system. The branch of the hepatic artery supplying this pseudoaneurysm was identified and successfully embolized. The patient’s symptoms and lab abnormalities resolved shortly after this intervention.

Discussion: Hepatic artery pseudoaneurysm formation is a rare complication of trauma to the hepatobiliary system. It has been reported in a few case reports after cholecystectomy or blunt trauma. Hemobilia from pseudoaneurysm formation after CT-guided percutaneous liver biopsy is extremely rare. Percutaneous biopsy of the hepatobiliary system may increase the risk for hemobilia. Angiography can be both a diagnostic and therapeutic procedure in patients with hemobilia. 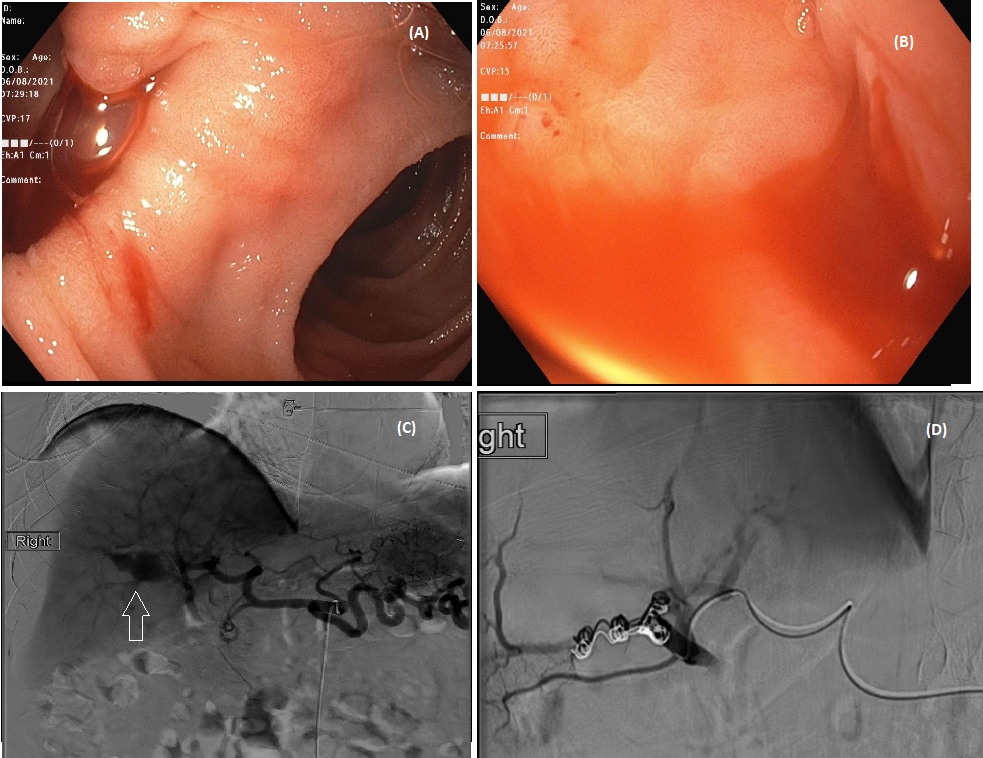