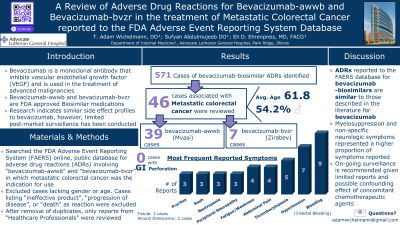 Introduction: Bevacizumab inhibits vascular endothelial growth factor and is used for the treatment of advanced malignancies. Bevacizumab-awwb was the first FDA approved biosimilar medication in 2017 and was followed by bevacizumab-bvzr. While prior research supports a similar side effect profile between bevacizumab and its biosimilars, there has been limited post-market description of biosimilar adverse drug reactions (ADRs) in the United States. This study reviewed cases of bevacizumab biosimilar ADRs in the treatment of metastatic colorectal cancer as reported to the FDA Adverse Event Reporting System (FAERS) database.

Methods: All ADR cases associated with bevacizumab-awwb and bevacizumab-bvzr reported to the FAERS database were reviewed. A dataset containing only cases reporting metastatic colorectal cancer as the reason for use was created. Cases lacking patient age or gender were removed. Reaction types including “ineffective product”, “progression of disease”, or “death” were omitted from review. Only reports from Healthcare Professionals were included and all duplicates were removed. Patient demographic data was reviewed.

Results: 571 cases of bevacizumab biosimilar-associated ADR were reported to FAERS. Of these, 46 colorectal cancer cases were identified and reviewed. 39 cases were attributable to bevacizumab-awwb (84.8%) and 7 to bevacizumab-bvzr (15.2%). 54.2% of patients were male (25 of 46) and average patient age was 61.8 +/- 11.5 years. The most common reported ADRs were: bleeding (9; 3 with rectal bleeding), hypertension (7), thrombocytopenia (5), abdominal pain (4), neuropathy (4), and fatigue/weakness (4). No gastrointestinal perforations were identified. A complete reaction list is illustrated in figure 1. Most cases occurred in the United States (28).

Discussion: Prior research has identified several commonly encountered bevacizumab-associated ADRs including: hypertension, proteinuria, hemorrhage, venous/arterial thromboembolism, impaired wound healing, and gastrointestinal perforation. While our review identified 46 cases of bevacizumab biosimilar ADRs with a similar profile to bevacizumab, non-specific neurologic ADRs and myelosuppression were more commonly reported amongst reviewed cases. Though these ADRs could be attributable to concomitant chemotherapeutics or underlying malignancy, on-going surveillance is warranted. The importance of biosimilar surveillance is further magnified by the growing support for biosimilar medication use in inflammatory bowel disease (IBD).
Additional reaction types with 1 case: back pain, abscess, renal dysfunction, hypothermia, cough,
dyspnea, angina, anxiety, headache, muscle spasm, dizziness, tooth extraction, seizure, constipation, and
intestinal obstruction.
Table: This figure represents the complete list of ADRs associated with bevacizumab-awwb and bevacizumab-bvzr in the treatment of colorectal cancer as reported to the FAERS database by healthcare professionals.