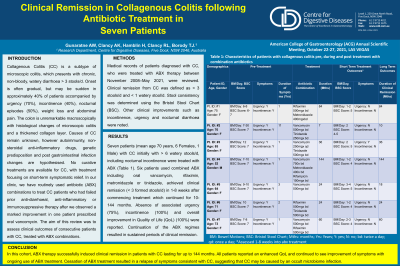 Introduction: Collagenous Colitis (CC) is a subtype of microscopic colitis, which presents with chronic, non-bloody, watery diarrhoea > 3 stools/d. Onset is often gradual, but may be sudden in approximately 40% of patients accompanied by urgency (70%), incontinence (40%), nocturnal episodes (50%), weight loss and abdominal pain. The colon is unremarkable macroscopically with histological changes of microscopic colitis and a thickened collagen layer. Causes of CC remain unknown, however autoimmunity, non-steroidal anti-inflammatory drugs, genetic predisposition and post gastrointestinal infection changes are hypothesised. No curative treatments are available for CC, with treatment focusing on short-term symptomatic relief. In our clinic, we have routinely used antibiotic (ABX) combinations to treat CC patients who had failed prior anti-diarrhoeal, anti-inflammatory or immunosuppressive therapy after we observed a marked improvement in one patient prescribed oral vancomycin. The aim of this review was to assess clinical outcomes of consecutive patients with CC, treated with ABX combinations.

Methods: Medical records of patients diagnosed with CC, who were treated with ABX therapy between November 2008–May 2021, were reviewed. Clinical remission from CC was defined as < 3 stools/d and < 1 watery stool/d. Stool consistency was determined using the Bristol Stool Chart (BSC). Other clinical improvements such as incontinence, urgency and nocturnal diarrhoea were noted.

Discussion: In this cohort, ABX therapy successfully induced clinical remission in patients with CC lasting for up to 144 months. All patients reported an enhanced QoL and continued to see improvement of symptoms with ongoing use of ABX treatment. Cessation of ABX treatment resulted in a relapse of symptoms consistent with CC, suggesting that CC may be caused by an occult microbiome infection.


Table: Table 1: Characteristics of patients with collagenous colitis pre, during and post treatment with combination antibiotics