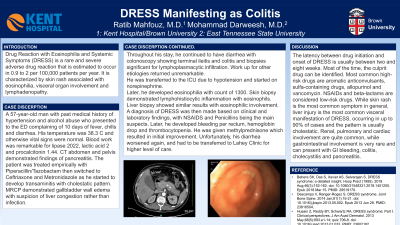 Introduction: Drug Reaction with Eosinophilia and Systemic Symptoms (DRESS) is a rare and severe adverse drug reaction that is estimated to occur in 0.9 to 2 per 100,000 patients per year. It is characterized by skin rash associated with eosinophilia, visceral organ involvement and lymphadenopathy.

Case Description/Methods: A 57-year-old man with past medical history of hypertension and alcohol abuse who presented to the ED complaining of 10 days of fever, chills and diarrhea. His temperature was 38.3 C and otherwise vital signs were normal. Blood work was remarkable for lipase 2022, lactic acid 2 and procalcitonin 1.44. CT abdomen and pelvis demonstrated findings of pancreatitis. The patient was treated empirically with Piperacillin/Tazobactam then switched to Ceftriaxone and Metronidazole as he started to develop transaminitis with cholestatic pattern. MRCP demonstrated gallbladder wall edema with suspicion of liver congestion rather than infection. Throughout his stay, he continued to have diarrhea with colonoscopy showing terminal ileitis and colitis and biopsies significant for lymphoplasmacytic infiltration. Work up for other etiologies returned unremarkable. He was transferred to the ICU due to hypotension and started on norepinephrine. Later, he developed eosinophilia with count of 1300. Skin biopsy demonstrated lymphohistiocytic inflammation with eosinophils. Liver biopsy showed similar results with eosinophilic involvement. A diagnosis of DRESS was then made based on clinical and laboratory findings, with NSAIDS and Penicillins being the main suspects. Later, he developed bleeding per rectum, hemoglobin drop and thrombocytopenia. He was given methylprednisone which resulted in initial improvement. Unfortunately, his diarrhea worsened again, and had to be transferred to Lahey Clinic for higher level of care.

Discussion: The latency between drug initiation and onset of DRESS is usually between two and eight weeks. Most of the time, the culprit drug can be identified. Most common high-risk drugs are aromatic anticonvulsants, sulfa-containing drugs, allopurinol and vancomycin. NSAIDs and beta-lactams are considered low-risk drugs. While skin rash is the most common symptom in general, liver injury is the most common visceral manifestation of DRESS, occurring in up to 90% of cases and the pattern is usually cholestatic. Renal, pulmonary and cardiac involvement are quite common, while gastrointestinal involvement is very rare and can present with GI bleeding, colitis, cholecystitis and pancreatitis. 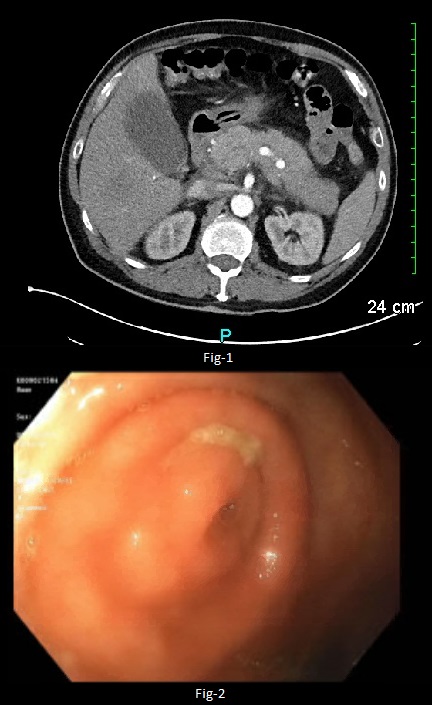