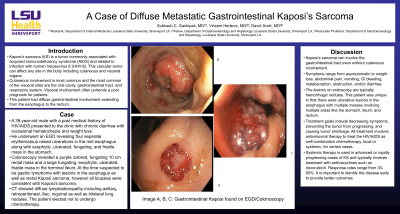 Introduction: Kaposi’s sarcoma (KS) is a tumor commonly associated with acquired immunodeficiency syndrome (AIDS) and related to infection with human herpesvirus 8 (HHV-8). This vascular tumor can affect any site in the body including cutaneous and visceral organs. Cutaneous involvement is most common and the most common of the visceral sites are the oral cavity, gastrointestinal tract, and respiratory system. Visceral involvement often portends a poor prognosis for patients. This patient had diffuse gastrointestinal involvement extending from the esophagus to the rectum.

Case Description/Methods: A 39-year-old male with a past medical history of HIV/AIDS presented to the clinic with chronic diarrhea with occasional hematochezia and weight loss. He underwent an EGD revealing four separate erythematous raised ulcerations in the mid esophagus along with exophytic, ulcerated, fungating, and friable mass in the stomach. Colonoscopy revealed a purple colored, fungating 10 cm rectal mass and a large fungating, exophytic, ulcerated, friable mass in the terminal ileum. At the time suspected to be gastric lymphoma with lesions in the esophagus as well as rectal Kaposi sarcoma, however all biopsies were consistent with Kaposi’s sarcoma. CT showed diffuse lymphadenopathy including axillary, retroperitoneal, iliac, inguinal as well as bilateral lung nodules. The patient elected not to undergo chemotherapy.

Discussion: Kaposi’s sarcoma can involve the gastrointestinal tract even without cutaneous involvement. Symptoms range from asymptomatic to weight loss, abdominal pain, vomiting, GI bleeding, malabsorption, obstruction, and/or diarrhea. The lesions on endoscopy are typically hemorrhagic nodules. This patient was unique in that there were ulcerative lesions in the esophagus with multiple masses involving multiple areas like the stomach, ileum, and rectum. Treatment goals include decreasing symptoms, preventing the tumor from progressing, and causing tumor shrinkage. All treatment involves antiretroviral therapy to treat the HIV/AIDS as well combination chemotherapy, local or systemic, for certain cases. Systemic therapy is used in advanced or rapidly progressing cases of KS and typically involves treatment with anthracyclines such as doxorubicin. Response rates range from 30-60%. It is important to identify the disease early to provide better outcomes.

Figure: A: Exophytic, ulcerated, fungating, and friable mass extending from the cardia through the greater curvature of the stomach
B: Sigmoid colon lesion
C: Purple, fungating, vascular non-circumferential mass in the rectum. Mass measuring approximately 10 cm