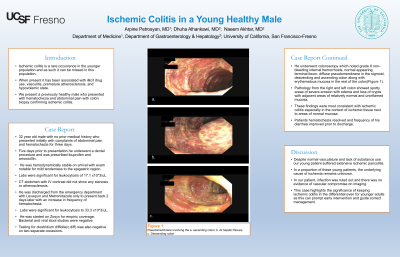 Introduction: Ischemic colitis is a rare occurrence in the younger population and as such it can be missed in this population. When present it has been associated with illicit drug use, vasculitis, premature atherosclerosis, and hypovolemic state. We present a previously healthy male who presented with hematochezia and abdominal pain with colon biopsy confirming ischemic colitis.

Case Description/Methods: Our patient is a 32 year old male with no prior medical history who presented initially with complaints of abdominal pain and hematochezia for three days. Five days prior to presentation he underwent a dental procedure and was prescribed ibuprofen and amoxicillin. He was hemodynamically stable on arrival with exam notable for mild tenderness to the epigastric region. Labs were significant for leukocytosis of 17.1 x10*3/uL. Imaging with CT abdomen with IV contrast did not show any stenosis or atherosclerosis. He was discharged from the emergency department with Levaquin and Metronidazole only to present back 2 days later with an increase in frequency of hematochezia. Labs were significant for leukocytosis to 33.3 x10*3/uL. He was started on Zosyn for empiric coverage. Bacterial and viral stool studies were negative. Testing for clostridium difficile(c.diff) was also negative on two separate occasions. He underwent colonoscopy which noted grade II non-bleeding internal hemorrhoids, normal appearing terminal ileum, diffuse pseudomembrane in the sigmoid, descending and ascending colon along with erythematous mucosa in the rest of the colon. Pathology from the right and left colon showed spotty areas of severe erosion with edema and loss of crypts with adjacent areas of relatively normal and uninflamed mucosa. These findings were most consistent with ischemic colitis especially in the context of ischemic tissue next to areas of normal mucosa. Patients hematochezia resolved and frequency of his diarrhea improved prior to discharge.

Discussion: Despite normal vasculature and lack of substance use our young patient suffered extensive ischemic pancolitis.In a proportion of these young patients, the underlying cause of ischemia remains unknown. In our patient, infection was ruled out and there was no evidence of vascular compromise on imaging. This case highlights the significance of keeping ischemic colitis in the differential even for younger adults as this can prompt early intervention and guide correct management. 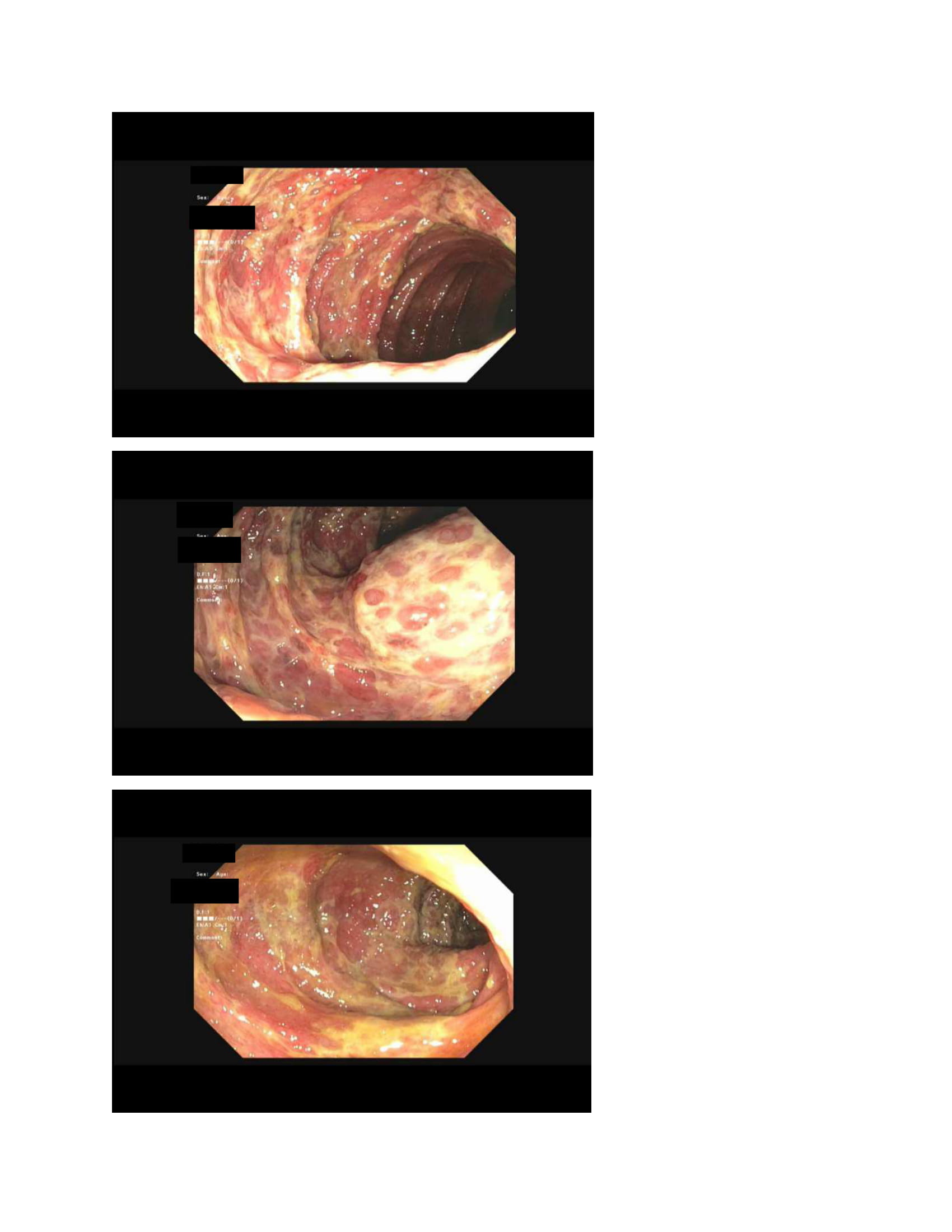 Figure: Figure 1.Diffuse pseudomembrane of the a.ascending colon, b. at the hepatic flexure, c.descening colon