P2296 - Anorectal Melanoma: A Rare but Potentially Fatal Cause of Rectal Bleeding 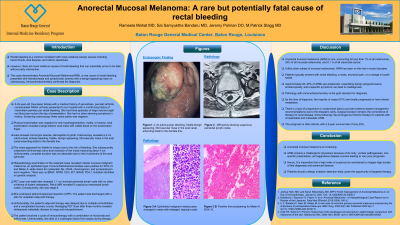 Discussion: Anorectal melanoma (ARM) is rare, having fewer than 700 cases reported in the literature. Patients with anorectal melanoma typically present with rectal bleeding, anorectal pain, and change in bowel habits. The gold standard for diagnosis is immunohistochemistry. Treatment strategies include surgery with or without immunotherapy. Unfortunately, recurrence and mortality rate are high, with a 5-year survival rate of less than 20% and a median survival of less than 2 years. In summary, ARM is a rare and aggressive variant of mucosal melanoma which is often associated with diagnosis at advanced stage, high metastatic potential, and high mortality. It is imperative that a high index of suspicion be maintained to mitigate the high burden of late diagnoses and advanced disease.