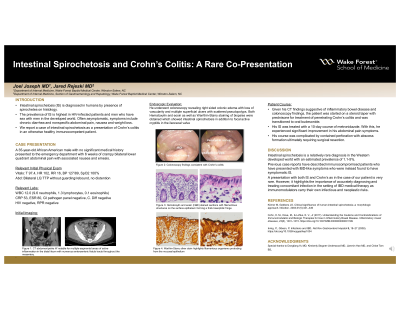 Introduction: More commonly found in animals, intestinal spirochetosis (IS) is diagnosed in humans by presence of spirochetes on histology. Prevalence is highest in HIV-infected patients and men who have sex with men in the developed world. Often asymptomatic, symptoms include chronic diarrhea and nonspecific abdominal pain, nausea and weight loss. We report a case of intestinal spirochetosis as a presentation of Crohn’s colitis in an otherwise healthy immunocompetent patient.

Case Description/Methods: A 35 year-old African American male with no significant medical history presented to the emergency department with 6 weeks of crampy bilateral lower quadrant abdominal pain with associated nausea and nonbloody nonbilious emesis. His vital signs were within normal limits aside from mild tachycardia with heart rate 102 beats/min. There was tenderness to deep palpation over the bilateral lower quadrants of his abdomen. Laboratory testing revealed WBC 12.0, CRP 53, and ESR 80. Serum lipase, lactic acid, urinalysis, renal function, and hepatic function labs were all within normal limits. A CT abdomen/pelvis with contrast showed multiple segmental areas of active inflammation in the distal ileum with numerous enteroenteric fistula tracts throughout the mesentery. He underwent colonoscopy revealing right sided colonic edema with loss of vascularity and multiple superficial ulcers with scattered pseudopolyps. Both Hematoxylin and eosin as well as Warrthin-Starry staining of biopsies were obtained which showed intestinal spirochetosis in addition to focal active cryptitis in the ileocecal valve. Given his CT findings suggestive of inflammatory bowel disease and colonoscopy findings, the patient was started on a steroid taper with prednisone for treatment of penetrating Crohn’s colitis and was transitioned to oral budesonide. IS was treated with a 10-day course of metronidazole. With this, he experienced significant improvement in his abdominal pain symptoms.

Discussion: IS is a relatively rare diagnosis in the developed world with an estimated prevalence of 1.1-5%. Previous case reports have described immunocompromised patients who have presented with IBD-like symptoms who were instead found to have symptomatic IS. A presentation with both IS and Crohn’s as in the case of our patient is very rare. However, it highlights the importance of accurately diagnosing and treating concomitant infection in the setting of IBD medical therapy as immunomodulators carry their own infectious and neoplastic risks. 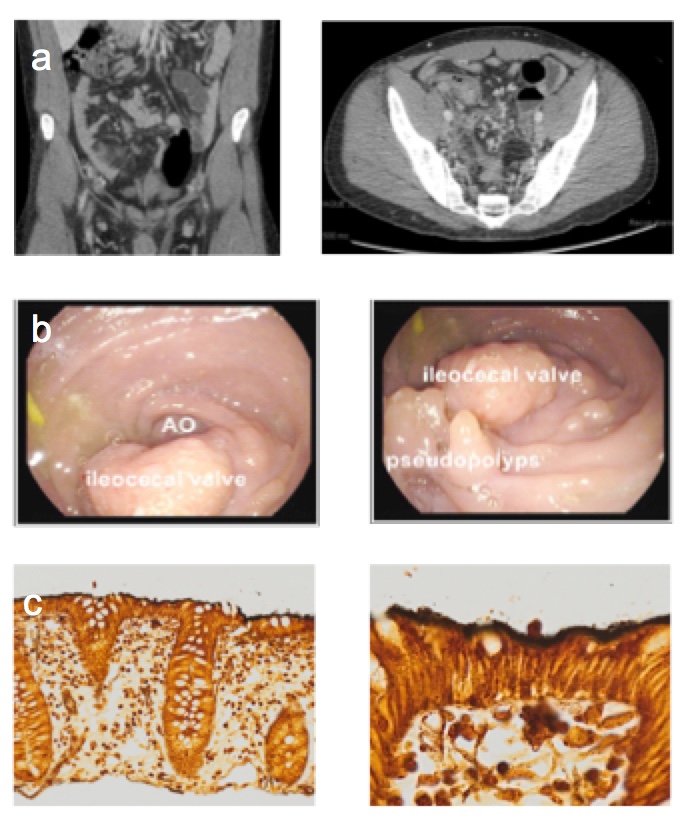