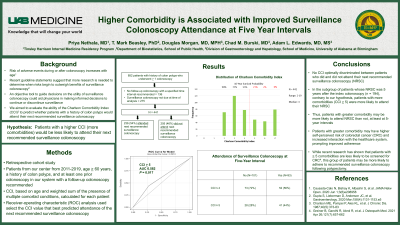 Methods: We conducted a retrospective cohort study of patients from our institution 60 years of age or older with a history of colon polyps and at least one prior colonoscopy in our system with a follow-up colonoscopy recommended at a specified time interval. We used receiver-operating characteristic analysis to test for a CCI value that best predicted attendance of the NRSC.

Results: Of the 852 patients with a history of polyps who underwent at least one colonoscopy, 136 (16%) were not recommended a follow-up colonoscopy at a specified time interval. Of those who did have a follow-up surveillance colonoscopy recommended, 236 (33%) attended their NRSC, 205 (29%) did not attend, and 275 (38%) patients had NRSC that was not yet due at the time of analysis. In the overall cohort of patients who either did or did not attend their NRSC (n = 441), there was a non-significant trend for greater comorbidity to predict increased likelihood of attendance (CCI > 5 OR 1.26, AUC 0.527, P = 0.243). Likelihood of attendance decreased as recommended interval to next colonoscopy increased (P = 0.046). For patients recommended a follow-up colonoscopy in 5 years (n = 194), those with higher comorbidity (CCI > 5) were more likely to attend NRSC than not (OR 2.06, AUC 0.58, P = 0.017) (Table).

Discussion: Patients with greater comorbidity may be more likely to attend NRSC than not. Exact reasons for this are unclear but could include greater self-perceived risk of colorectal cancer (CRC) and increased interaction with the healthcare system. While past research has shown that patients with > 5 comorbidities are less likely to be screened for CRC, this group of patients may be more likely to adhere to recommended surveillance colonoscopy following polypectomy.