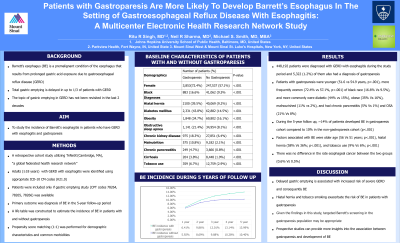 Introduction: Barrett’s esophagus (BE) is a premalignant condition of the esophagus resulting from ongoing exposure to gastric acid and other caustic substances via gastroesophageal reflux disease (GERD). Gastroparesis is known to facilitate GERD. There is limited data on the prevalence of gastroparesis in BE patients. The aim of this study was to determine BE incidence in patients who have GERD with esophagitis in the setting of gastroparesis.

Methods: This retrospective, multicenter cohort study utilized TriNetX (Cambridge, MA), “a global federated health research network”. The platform was searched to obtain aggregated health records from around 70 million patients in 49 healthcare organizations from 5/2011 through 4/2021. Adult patients (≥18 years) who had GERD with esophagitis were identified using appropriate ICD-10 CM codes (K21.0). Within this cohort, patients were queried for a diagnosis of gastroparesis as well as a history of gastric emptying scintigraphy (GES) testing. This cohort was compared to patients with GERD and esophagitis but no known gastroparesis. The primary outcome was diagnosis of BE within a 5-year follow-up period. Propensity score matching was performed for baseline characteristics and common comorbidities. Risk ratio (RR) and risk difference (RD) were calculated and Kaplan-Maier analysis with a survival curve was obtained for primary outcomes.

Results: A total of 448,192 adult patients were diagnosed with GERD and esophagitis during the study period; 5,322 (1.2%) also had a diagnosis of gastroparesis by GES. Patients with gastroparesis were younger and were more frequently women, and Black than their counterparts, and were more likely to have hiatal hernia and other comorbidities (Table 1). During the 5-year period, 8.1% of gastroparesis patients with GERD and esophagitis developed BE compared to 4.4% of non-gastroparetics (RR= 1.86, RD= 3.76%; p< .001). There was no significant difference in the incidence of esophageal adenocarcinoma (EAC), which was seen in less than 1% of patients in each cohort.

Discussion: Our study demonstrates an increased risk of developing BE for patients with GERD and esophagitis who also have gastroparesis. While the risk of developing EAC was no different between the cohorts, it may be due to a limited 5-year follow up time. This study suggests gastroparesis should be considered as a risk factor when deciding whether to perform endoscopic screening for BE.
SD standard deviation
Table: Table 1. Baseline Characteristics Before and After Propensity Score Matching.