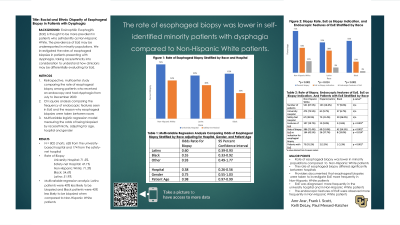 Introduction: Eosinophilic Esophagitis (EoE) is thought to be more prevalent in patients who self-identify as white. However, the prevalence of EoE may be underreported in non-white populations. We aimed to investigate rates of esophageal biopsies in patients presenting with dysphagia, stratified by self-identified race and ethnicity, to better understand how clinicians may differentially evaluate for EoE.

Discussion: The rate of esophageal biopsy was lower in self-identified Black and Latinx patients presenting with dysphagia compared to Non-Hispanic White patients. The prevalence of EoE may be underestimated in minority populations due to variability of endoscopic practices between hospitals, differences in endoscopic findings between races, or potential pre-conceived provider bias of the demographic historically associated with EoE patients.

Table: Results of Multicenter Study in patients with Dysphagia Stratified by Race and Ethnicity
*p-values obtained from chi-square analysis
There were 51 patients that self-identified as Asian, Native American, did not self-identify with a race or Hispanic ethnicity, or were two or more races