P2425 - Oh My Grill! A Case of Ingestion of a Grill-Cleaning Wire Brush Bristle 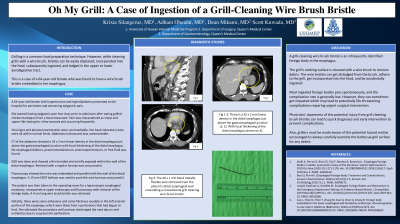 Introduction: Grilling is a common food preparation technique. However, while cleaning grills with a wire brush, bristles can be easily displaced, incorporated into the food, subsequently ingested, and lodged in the upper or lower digestive tract. This is a case of a 64-year-old female who was found to have a wire brush bristle embedded in her esophagus.

Case Description/Methods: A 64-year-old female presented to the hospital for persistent and worsening epigastric pain which started four days prior after eating grilled chicken barbeque from a local restaurant. Pain was characterized as sharp and spasm-like lasting for a few seconds and occurring frequently. She also reported melena with mixed black and brown stool. Vital signs and physical examination and basic laboratory data were all normal. Abdominal ultrasound was unremarkable. Computed tomography of the abdomen showed a 35 x 2 mm linear density in the distal esophagus just above the gastroesophageal junction with focal thickening. No esophageal dilation, pneumomediastinum, or pneumoperitoneum was found. Esophagogastroduodenoscopy was done and showed a thin braided wire briefly exposed within the wall of the distal esophagus. Removal with regular forceps was unsuccessful. Fluoroscopy was then used to localize the wire. It was embedded and parallel with the wall of the distal esophagus. A 15 mm ERCP balloon was used to push the wire but was unsuccessful. The patient then underwent a laparoscopic esophageal myotomy, intraoperative upper endoscopy and fluoroscopy with retrieval of a 4-cm wire brush bristle. Notably, there were some adhesions and fibrinous exudate in the left anterior portion of the esophagus which were likely from a perforation that had begun to heal. She tolerated the procedure well and was discharged the next day on oral antibiotics due to suspicion for perforation.

Discussion: A grill-cleaning wire brush bristle is an infrequently identified foreign body in the esophagus. The wire bristles can get dislodged from the brush, adhere to the grill, get incorporated into the food, and be accidentally ingested. Most ingested foreign bodies pass spontaneously, with low complication rates. However, they can get impacted which may lead to potentially life-threatening complications requiring urgent surgical intervention. Physicians’ awareness of this potential injury can lead to quick diagnoses and early intervention. Also, grillers should be aware of this potential hazard and to always carefully examine the barbecue grill surface for any debris. 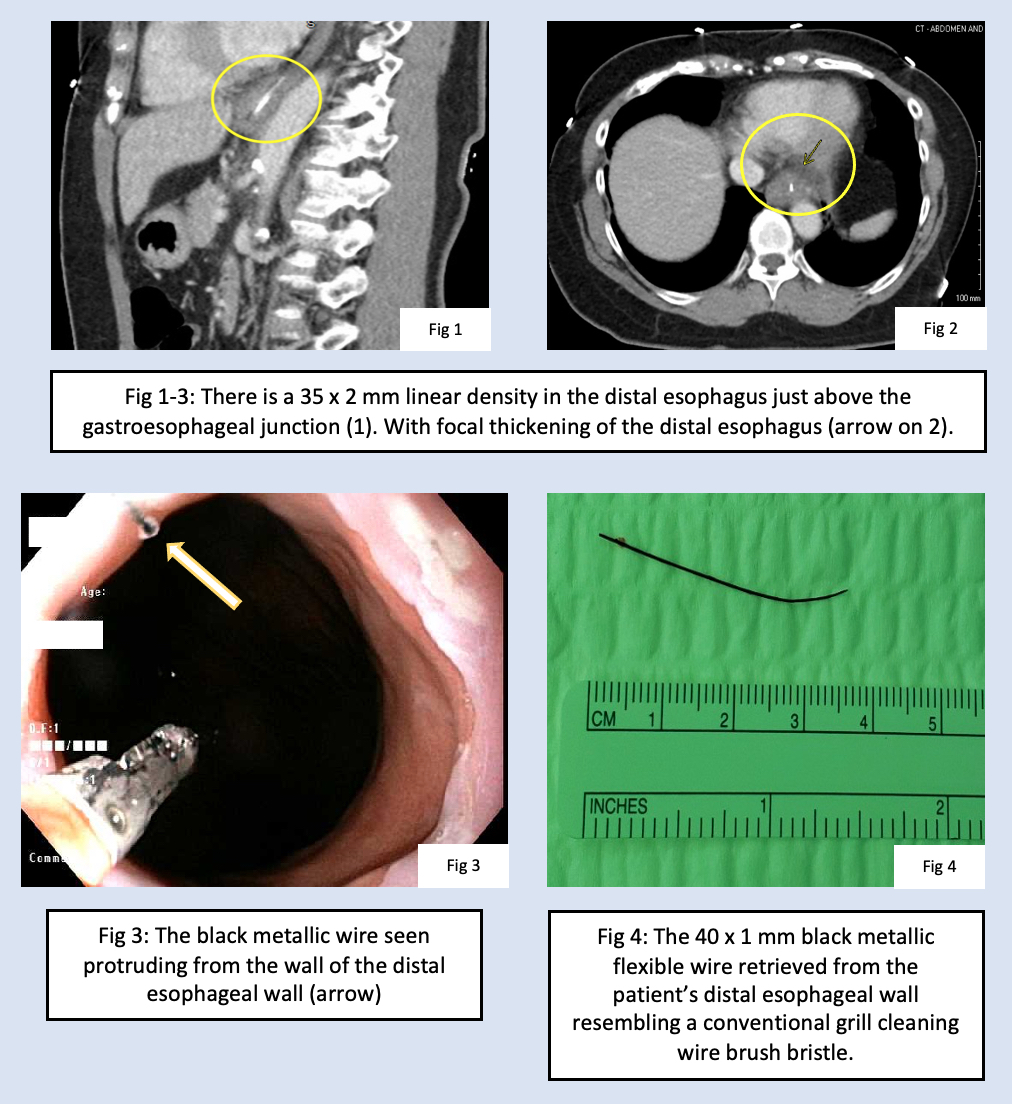