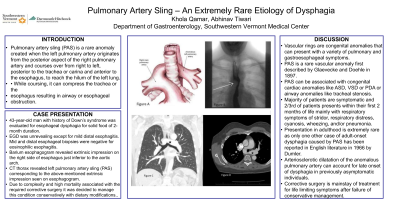 Case Description/Methods: 43-year-old man with history of Down’s syndrome was evaluated for esophageal dysphagia for solid food of 2-month duration. EGD was unrevealing except for mild distal esophagitis. Mid and distal esophageal biopsies were negative for eosinophilic esophagitis. Barium esophagogram revealed extrinsic impression on the right side of esophagus just inferior to the aortic arch. CT thorax revealed showed presence of left pulmonary artery (PAS) corresponding to the above-mentioned extrinsic impression seen on esophagogram. Due to complexity and high mortality associated with the required corrective surgery it was decided to manage this condition conservatively with dietary modifications.

Discussion: Vascular rings are congenital anomalies that can present with a variety of pulmonary and gastroesophageal symptoms. PAS is a rare vascular anomaly first described by Glaevecke and Doehle in 1897. PAS can be associated with congenital cardiac anomalies like ASD, VSD or PDA or airway anomalies like tracheal stenosis. Majority of patients are symptomatic and 2/3rd of patients presents within their first 2 months of life mainly with respiratory symptoms of stridor, respiratory distress, cyanosis, wheezing, and/or pneumonia. Presentation in adulthood is extremely rare as only one other case of adult-onset dysphagia caused by PAS has been reported in English literature in 1966 by Dumler. Arteriosclerotic dilatation of the anomalous pulmonary artery can account for late onset of dysphagia in previously asymptomatic individuals. Corrective surgery is mainstay of treatment for life-limiting symptoms after failure of conservative management.