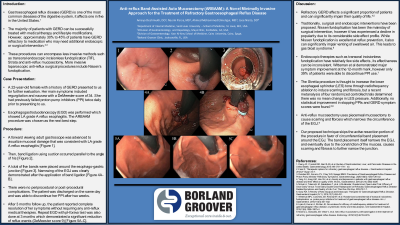 Introduction: Gastroesophageal reflux disease (GERD) is one of the most common diseases of the digestive system, it affects one in five in the United States. The majority of patients with GERD can be successfully treated with medical therapy and lifestyle modifications. However, approximately 30% to 45% of patients have GERD refractory to medication who may need additional endoscopic or surgical intervention. Here, we present a case of 22-year-old female with refractory GERD successfully treated with our novel endoscopic anti-reflux procedure called endoscopic anti-reflux band-assisted auto mucosectomy (ARBAAM).

Case Description/Methods: A 22-year-old female with a history of GERD presented to us for further evaluation. Her main symptoms included regurgitation and nausea with a DeMeester score of 38. She had previously failed proton pump inhibitors (PPI) twice daily prior to presenting to us. Esophagogastroduodenoscopy (EGD) was performed which showed LA grade A. Endoscopic intervention was chosen as the optimal next step. A forward viewing adult gastroscope was advanced to visualize mucosal damage that was consistent with LA grade A reflux esophagitis. Then, band ligation using suction occurred parallel to the angle of his. A total of five bands were placed around the esophago-gastric junction (EGJ). Narrowing of the EGJ was clearly demonstrated after the application band ligation. There were no periprocedural or post-procedural complications. The patient was discharged on the same day and was able to discontinue her PPI after two weeks. After 3 months follow up, the patient reported complete resolution of her symptoms without requiring any anti-reflux medical therapies. Repeat EGD with pH bravo test was also done at 3 months which demonstrated a significant reduction of reflux events (DeMeester score 9).

Discussion: Anti-reflux mucosectomy uses piecemeal mucosectomy to cause scarring and fibrosis which narrows the circumference of the EGJ. Our proposed technique skips the active resection portion of the procedure in favor of circumferential band placement around the EGJ. The band placement itself narrows the EGJ, and eventually due to the constriction of the mucosa, causes scarring and fibrosis to further narrow the junction. ARBAAM is a novel minimally invasive endoscopic intervention that only utilizes band ligation and therefore has the potential to be less costly and technically challenging compared with other endoscopic and surgical interventions. 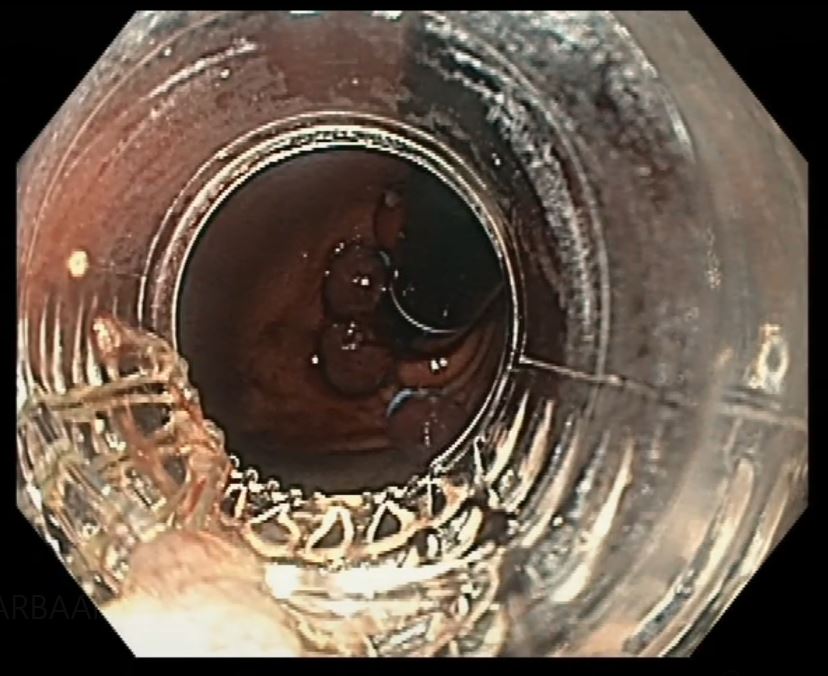 Figure: Completion of the ARBAAM procedure after application of five total bands around the EGJ junction.