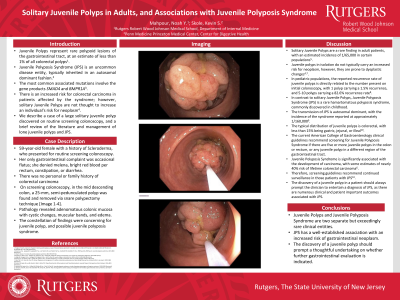 Introduction: Juvenile Polyps represent rare polypoid lesions of the GI tract, estimated at less than 1% of all colorectal polyps. Juvenile Polyposis Syndrome (JPS) is an uncommon disease entity, typically inherited in an autosomal dominant fashion.
The most common associated mutations are gene products SMAD4 and BMPR1A. There is an increased risk for colorectal carcinoma in this syndrome; however, solitary Juvenile Polyps are not thought to increase risk for neoplasm. We describe a case of a large solitary juvenile polyp discovered on routine screening colonoscopy, and a brief review of the literature and management of juvenile polyps and JPS.

Case Description/Methods: The patient is a 59-year-old female with a history of Scleroderma, who presented for routine screening colonoscopy. Her only GI complaint was occasional flatus; she denied melena, bright red blood per rectum, constipation, diarrhea, or personal / family history of colorectal carcinoma. On screening colonoscopy, in the mid descending colon, a 25-mm, semi-pedunculated polyp was found and removed via snare polypectomy technique. Pathology revealed adenomatous colonic mucosa with cystic changes, muscular bands, and edema. The constellation of findings were concerning for juvenile polyp, and possible JPS.

Discussion: Solitary Juvenile Polyps are rare in adult patients, at an estimated incidence of 1/65,000. Juvenile polyps in isolation do not carry an increased risk for neoplasm, but they are prone to dysplastic changes. In contrast to solitary Juvenile Polyps, JPS is a rare hamartomatous polyposis syndrome, commonly discovered in childhood. The transmission of JPS is autosomal dominant, with the incidence of the syndrome reported at approximately 1/160,000. The typical distribution of juvenile polyps is colorectal, with less than 15% being gastric, jejunal, or illeal. The current ACG clinical guidelines recommend screening for JPS if there are five or more juvenile polyps in the colon or rectum, or any juvenile polyp in a different region of the gastrointestinal tract. JPS is significantly associated with the development of carcinoma, and a nearly 40% risk of lifetime colorectal carcinoma. Screening guidelines recommend continued surveillance in those patients with JPS. The discovery of a juvenile polyp in a patient should always prompt the clinician to entertain a diagnosis of JPS, as there are numerous clinical and patient important outcomes associated with JPS. 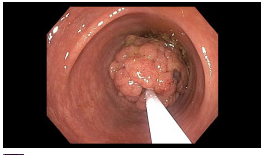