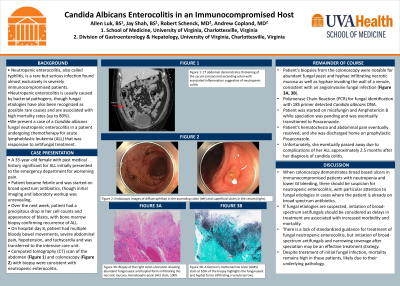 Introduction: Neutropenic enterocolitis is a rare infection that occurs in immunocompromised patients. Although most cases are from bacterial pathogens, fungal etiologies have been recognized as a rare cause and are associated with a high mortality (up to 80%). Due to its rarity, there is a paucity of literature describing treatment regimens and their outcomes. We present a case of a patient with acute lymphoblastic leukemia (ALL) undergoing chemotherapy who developed neutropenic enterocolitis secondary to Candida albicans that was responsive to treatment.

Case Description/Methods: A 35-year-old female with a past medical history significant for ALL complicated by recurrent CNS lymphoma presented to the ED for worsening acute on chronic pain. Though CBC on admission showed WBC within normal limits, she developed severe neutropenia with concurrent appearance of blasts. A bone marrow biopsy confirmed relapse of her ALL.

On hospital day 8, she was noted to have multiple bloody bowel movements, abdominal pain, and hypotension. CTAP demonstrated inflammation in the cecum and ascending colon suggestive of neutropenic colitis. Colonoscopy demonstrated multiple superficial ulcers up to 1 cm in diameter in the cecum and multiple diffuse aphthae in the hepatic flexure and ascending colon (Figures 1a and 1b). Biopsies were notable for abundant yeast and hyphal forms infiltrating the necrotic mucosa as well as hyphae invading the wall of the venule consistent with an angioinvasive fungal infection (Figures 1c and 1d).

The patient was started on micafungin and Amphotericin B, then transitioned to Posaconazole when PCR detected Candida albicans DNA. The patient’s hematochezia and abdominal pain resolved, and she was discharged home on prophylactic Posaconazole. She passed away 2.5 months later due to progression of her ALL.

Discussion: When colonoscopy demonstrates broad based ulcers in immunocompromised patients with neutropenia and lower GI bleeding, there should be suspicion for fungal etiologies and initiation of broad-spectrum antifungals should be considered as delays in treatment are associated with increased mortality and morbidity. There is a lack of standardized guidance for treatment of fungal neutropenic enterocolitis, however, initiating treatment with broad spectrum antifungals and narrowing coverage after a species is isolated may represent an effective treatment strategy. Still, it is important to realize that mortality remains high even if patients recover from the initial fungal infection. 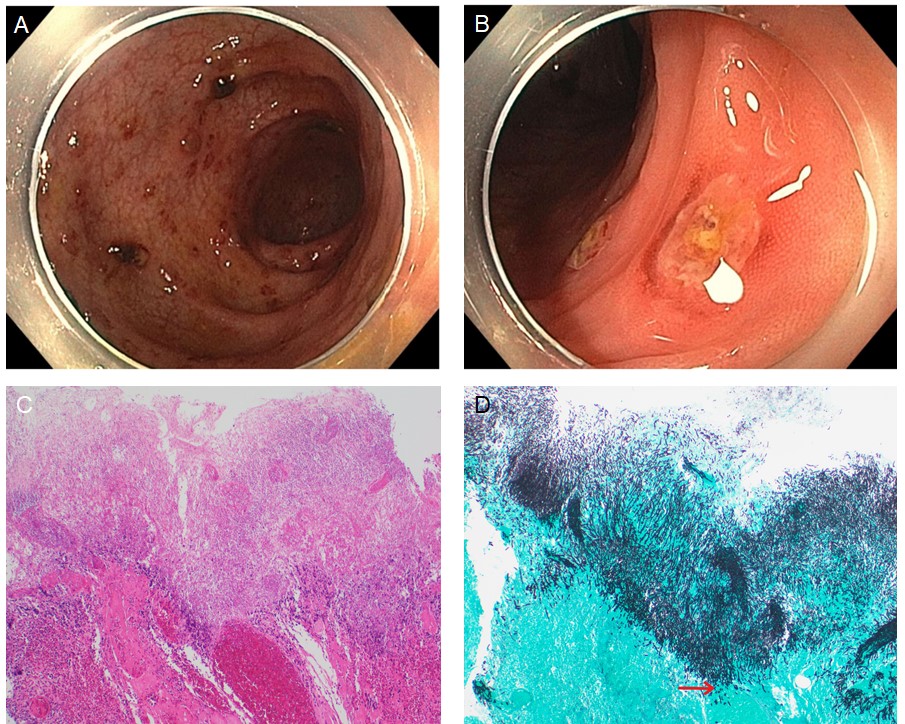 Figure: Figure 1a, 1b: Endoscopic images of multiple superficial ulcers in the cecum (1b) and multiple diffuse aphthae in the ascending colon (1c).
Figure 1c: Biopsy of the right colon ulceration showing abundant fungal yeast and hyphal forms infiltrating the necrotic mucosa. Hematoxylin-eosin (HE) stain, 100X.
Figure 1d: A Gomori’s methenamine silver (GMS) stain at 100x of the biopsy highlights the fungal yeast and hyphal forms infiltrating a venule (arrow)C