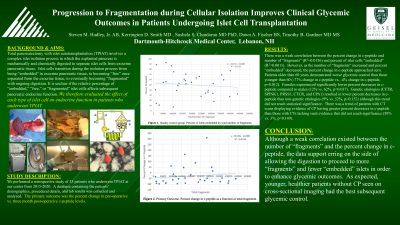 Introduction: Islet autotransplantation (IAT) involves a complex islet isolation process in which the explanted pancreas is digested to separate islet cells from exocrine pancreatic tissue. Islet cells transition during the isolation process from being “embedded” in exocrine pancreatic tissue, to becoming “free” once separated from the exocrine tissue, to eventually becoming “fragmented” with ongoing digestion. During this transition process, it is at the subjective discretion of the isolationist when to harvest the islets; however, it is unclear if the relative percentage of “embedded”, “free” or “fragmented” islet cells affects subsequent pancreatic endocrine function. We therefore evaluated the effect of each type of islet cell on endocrine function in patients who underwent IAT.

Methods: We performed a retrospective study of 33 patients who underwent IAT at our center from 2015-2020. A database containing the patients’ demographics, procedural details, and lab results was collected and analyzed. The primary outcome was the percent change in pre-operative vs. three month post-operative c-peptide levels.

Discussion: Although a weak correlation existed between the number of “fragments” and the percent change in c-peptide, the data support erring on the side of allowing the digestion to proceed to more “fragments” and fewer “embedded” islets in order to enhance glycemic outcomes. As expected, younger, healthier patients without CP seen on cross-sectional imaging had the best subsequent glycemic control.