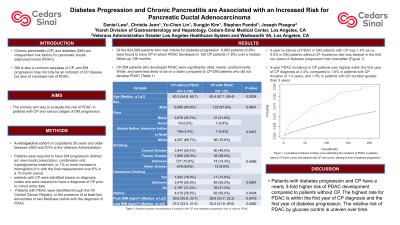 Introduction: Chronic pancreatitis (CP) and diabetes (DM) are independent risk factors for pancreatic ductal adenocarcinoma (PDAC). DM is also a common sequelae of CP, and DM progression may not only be an indicator of CP disease but also of increased risk of PDAC. The primary aim was to evaluate the risk of PDAC in patients with CP and various stages of DM progression.

Methods: This retrospective study was conducted on outpatients 50 years and older between 2000 and 2016 at the Veterans Administration. Patients were required to have DM progression defined as: new insulin prescription, combination oral hyperglycemia treatment, or 1% or more increase in hemoglobin A1c with the final measurement over 8% in a 15-month period. In these patients, patients with CP were identified based on diagnosis codes and were required to have a diagnosis of CP prior to cohort entry date. Patients with PDAC were identified through the VA Central Cancer Registry, or the presence of at least two encounters or two Medicare claims with the diagnosis of PDAC.

Median follow-up and cumulative incidence estimates of PDAC were calculated following Kaplan-Meier method where time to event is defined as time from DM progression to diagnosis to PDAC and patients who did not develop PDAC were censored at death or December 31, 2017.

Results: Of the 824,089 patients who met criteria for diabetes progression, 6,883 patients (0.8%) were found to have CP in whom PDAC developed in 125 CP patients (1.8%) over a median follow-up 108 months. CP-DM patients who developed PDAC were significantly older, leaner, predominantly White, and were less likely to be on a statin compared to CP-DM patients who did not develop PDAC (Table 1).

The 5-year incidence of PDAC in patients with CP was 1.4% as compared to 0.5% in diabetes patients without CP. Incidence rate was steeper in the first two years of diabetes progression then thereafter (Figure 1). 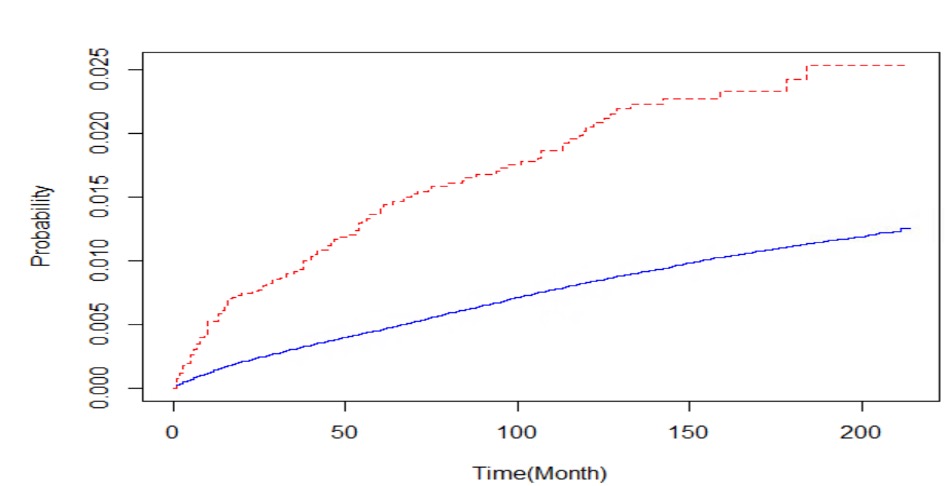 
Table: Table 1. Baseline patient characteristics in patients with CP and diabetes progression with or without PDAC.