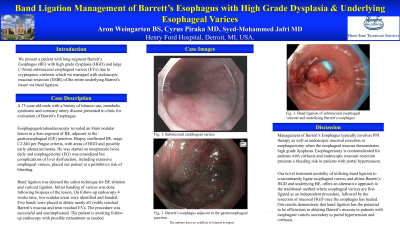 Introduction: We describe management of a patient with long-segment Barrett’s Esophagus (BE) with high grade dysplasia (HGD) and large ( >5mm) submucosal esophageal varices (EVs) due to cryptogenic cirrhosis which we managed with endoscopic mucosal resection (EMR) of the entire underlying Barrett’s tissue via band ligation.

Case Description/Methods: A 73-year-old male with a history of tobacco use, metabolic syndrome and coronary artery disease presented for evaluation of BE. Esophagogastroduodenoscopy revealed an 8mm nodular lesion in a 4cm segment of BE, adjacent to the gastroesophageal (GE) junction. Biopsy confirmed BE, stage C2-M4 per Prague criteria, with areas of HGD and possible early adenocarcinoma. He was started on omeprazole twice daily and esophagectomy (EG) was considered but complications of liver dysfunction, including extensive EVs, placed our patient at a prohibitive risk of bleeding. Band ligation was deemed the safest technique for BE ablation and variceal ligation. Initial banding of varices was done following biopsies of the lesion. On follow-up endoscopy 4 weeks later, two nodular areas were identified and banded. Five bands were placed to ablate nearly all visible residual Barrett’s mucosa and treat residual EVs. The procedure was successful and uncomplicated. Three subsequent endoscopic re-explorations treated persistent esophageal mucosal changes consistent with residual BE on a background of sclerotic epithelium, with BE stage C0-M4. Six, six and four bands were placed in each respective procedure with elimination of all visible residual Barrett’s mucosa. Subtle grade I EVs were found in the GE junction and deflated with banding. The patient is awaiting follow-up endoscopy with possible retreatment as needed.

Discussion: Management of BE typically involves PPI therapy and EMR or EG when the mucosa demonstrates HGD. EG is contraindicated for patients with cirrhosis and EMR presents a bleeding risk in patients with portal hypertension. Our novel treatment modality of utilizing band ligation to concomitantly ligate EVs and ablate Barrett’s HGD and underlying BE, offers an alternative approach to traditional methods where EVs are first ligated as an independent procedure, followed by the resection of mucosal HGD once the esophagus has healed.

We present a case where endoscopic band ligation was employed as an innovative alternative to EG and EMR for the management of BE with HGD and submucosal EVs, in a comorbid patient with BE and cirrhosis.