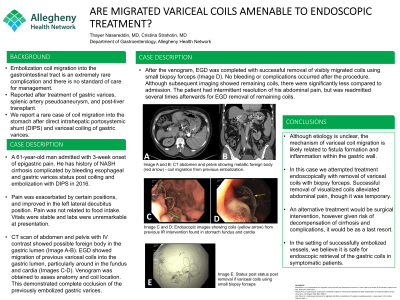 Case Description/Methods: A 61-year-old man admitted with 3-week onset of epigastric pain. He has history of NASH cirrhosis complicated by bleeding esophageal and gastric varices status post coiling and embolization with DIPS in 2016. Pain was exacerbated by certain positions, and improved in the left lateral decubitus position. Pain was not related to food intake. Vitals were stable and labs were unremarkable at presentation.
CT scan of abdomen and pelvis with IV contrast showed possible foreign body in the gastric lumen (Image A). EGD showed migration of previous variceal coils into the gastric lumen, particularly around in the fundus and cardia (Images B-C). Venogram was obtained to asses anatomy and coil location. This demonstrated complete occlusion of the previously embolized gastric varices.
After the venogram, EGD was completed with successful removal of visibly migrated coils using small biopsy forceps (Image D). No bleeding or complications occurred after the procedure. Although subsequent imaging showed remaining coils, there were significantly less compared to admission. The patient had intermittent resolution of his abdominal pain, but was readmitted several times afterwards for EGD removal of remaining coils.

Discussion: Although etiology is unclear, the mechanism of variceal coil migration is likely related to fistula formation and inflammation within the gastric wall. In this case we attempted treatment endoscopically with removal of variceal coils with biopsy forceps. Successful removal of visualized coils alleviated abdominal pain, though it was temporary. An alternative treatment would be surgical intervention, however given risk of decompensation of cirrhosis and complications, it would be as a last resort. In the setting of successfully embolized vessels, we believe it is safe for endoscopic retrieval of the gastric coils in symptomatic patients. 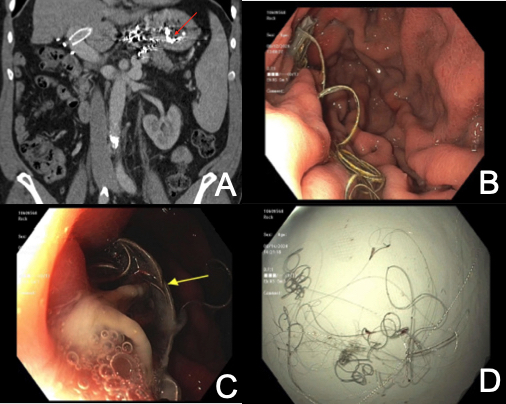