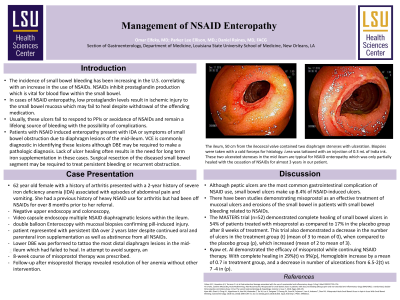 Introduction: The incidence of small bowel bleeding is increasing in the U.S. correlating with an increase in the use of NSAIDs. NSAIDs inhibit prostaglandin production which is vital for blood flow within the small bowel. In cases of NSAID enteropathy, low prostaglandin levels result in ischemic injury to the small bowel mucosa which may fail to heal despite cessation of the medication. This case highlights the use of misoprostol in the management of NSAID induced small bowel ulcers.

Case Description/Methods: A 62YO female with a history of arthritis presented with a 2-year history of severe iron deficiency anemia (IDA) associated with episodes of abdominal pain and vomiting. She had a previous history of heavy NSAID use for arthritis, but had been off NSAIDs for over 8 months prior to her referral. After initial negative workup, video capsule endoscopy (VCE) demonstrated multiple NSAID diaphragmatic lesions within the ileum. Biopsies using upper double balloon enteroscopy (DBE) confirmed pill-induced injury. Despite oral and parenteral iron supplementation as well as abstinence from all NSAIDs, this patient represented for IDA 2 years later. Lower DBE was performed to tattoo the most distal diaphragm lesions in the mid-ileum which had failed to heal in preparation for surgery. An 8-week course of misoprostol was then prescribed, which resulted in resolution of her anemia.

Discussion: Although peptic ulcers are considered to be the most common gastrointestinal complication of NSAID use, small bowel ulcers make up 8.4% of NSAID-induced ulcers. These ulcers may fail to respond to PPIs or avoidance of NSAIDs. Patients with NSAID induced enteropathy present with IDA or symptoms of small bowel obstruction due to diaphragm lesions of the mid-ileum. VCE is commonly diagnostic in identifying these lesions although DBE may be required to make a pathologic diagnosis. Lack of ulcer healing often results in the need for long term iron supplementation in these cases or surgical resection to treat persistent bleeding or recurrent obstruction. There have been studies demonstrating misoprostol as an effective treatment of mucosal ulcers and erosions of the small bowel in patients with small bowel bleeding related to NSAIDs. One trial showed complete healing of small bowel ulcers in 54% of patients treated with misoprostol as compared to 17% in the placebo group after 8 weeks of treatment. This case outlines the diagnosis and disease course of a patient with NSAID enteropathy treated with misoprostol rather than surgery. 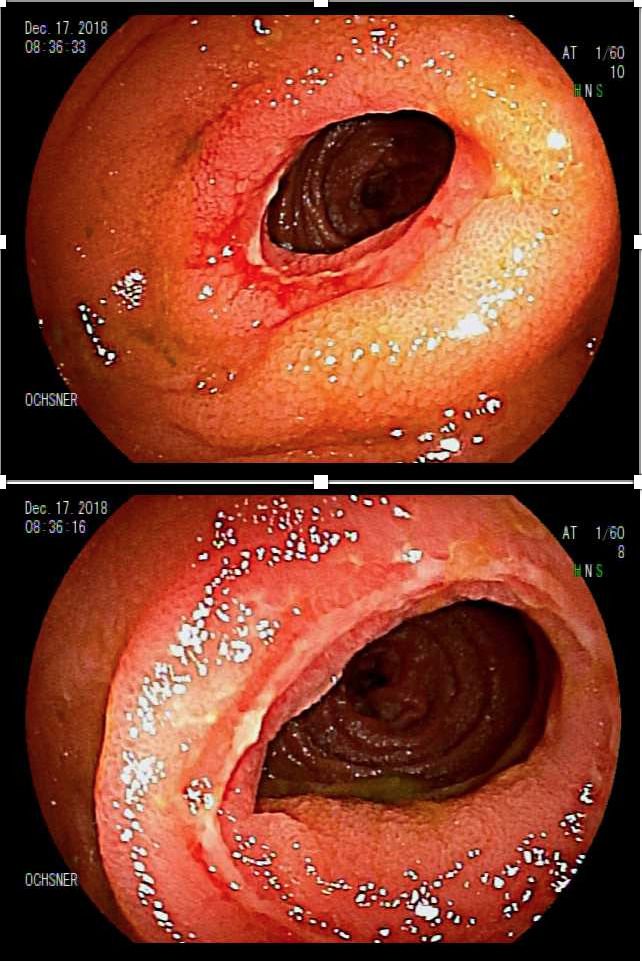 Figure: The ileum, 50 cm from the ileocecal valve contained a two diaphragm stenoses with ulceration. Biopsies were taken with a cold forceps for histology. Area was tattooed with an injection of 0.3 mL of India ink. These two ulcerated stenoses in the mid ileum are typical for NSAID enteropathy which was only partially healed with the cessation of NSAIDs for almost 3 years in our patient. This is not Crohn's disease.