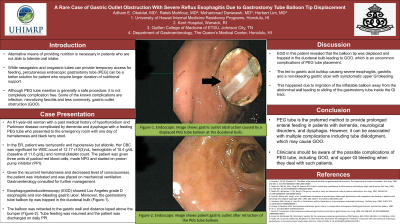 Introduction: Alternative means of providing nutrition is necessary in patients who are not able to tolerate oral intake.
While nasogastric and orogastric tubes can provide temporary access for feeding, percutaneous
endoscopic gastrostomy tube (PEG) can be a better solution for patient who require longer duration of
nutritional support. Although PEG tube insertion is generally a safe procedure, it is not completely
complication free. Some of the known complications are infection, necrotizing fasciitis and less
commonly, gastric outlet obstruction (GOO).

Case Description/Methods: This is an 81-year-old woman with a past medical history of hypothyroidism and Parkinson disease
complicated by dementia and dysphagia with a feeding PEG tube who presented to the emergency room
with one day of hematemesis and black tarry stool. She also reported abdominal pain but denied
dysphagia or change in bowel habits. She had no history of gastrointestinal (GI) bleeding and not on any
antiplatelets or anticoagulants.
In the ER, patient was tachycardic and hypotensive but afebrile. Her complete blood count (CBC) was
significant for white blood cell (WBC) count of 12.17 x10(3)/uL, hemoglobin of 10.4 g/dL (baseline of
11.6 g/dL) and normal platelet count. Basic metabolic panel was only significant for hypocalcemia of 5.5
mg/dL. Liver function test and coagulation profile were within normal limits. The patient was given three
units of packed red blood cells, made NPO and started on proton pump inhibitor (PPI). Given the
recurrent hematemesis and decreased level of consciousness, the patient was intubated and was placed on
mechanical ventilation. Gastroenterology consulted for further management.
Esophagogastroduodenoscopy (EGD) showed Los Angeles grade D esophagitis (Figure-1) and non-
bleeding gastric ulcer. Moreover, the gastrostomy tube balloon tip was trapped in the duodenal bulb. The
balloon was retracted to the gastric wall and distance taped above the bumper (Figure-2). Tube feeding
has been resumed and the patient was discharged on daily PPI.

Discussion: EGD in this patient revealed that the balloon tip was displaced and trapped in the duodenal bulb leading
to GOO, which is an uncommon complications of PEG tube placement. This led to gastric acid buildup
causing severe esophagitis, gastritis and a non-bleeding gastric ulcer with symptomatic upper GI
bleeding. This happened due to migration of the inflatable balloon away from the abdominal wall leading
to sliding of the gastrostomy tube inside the GI tract. 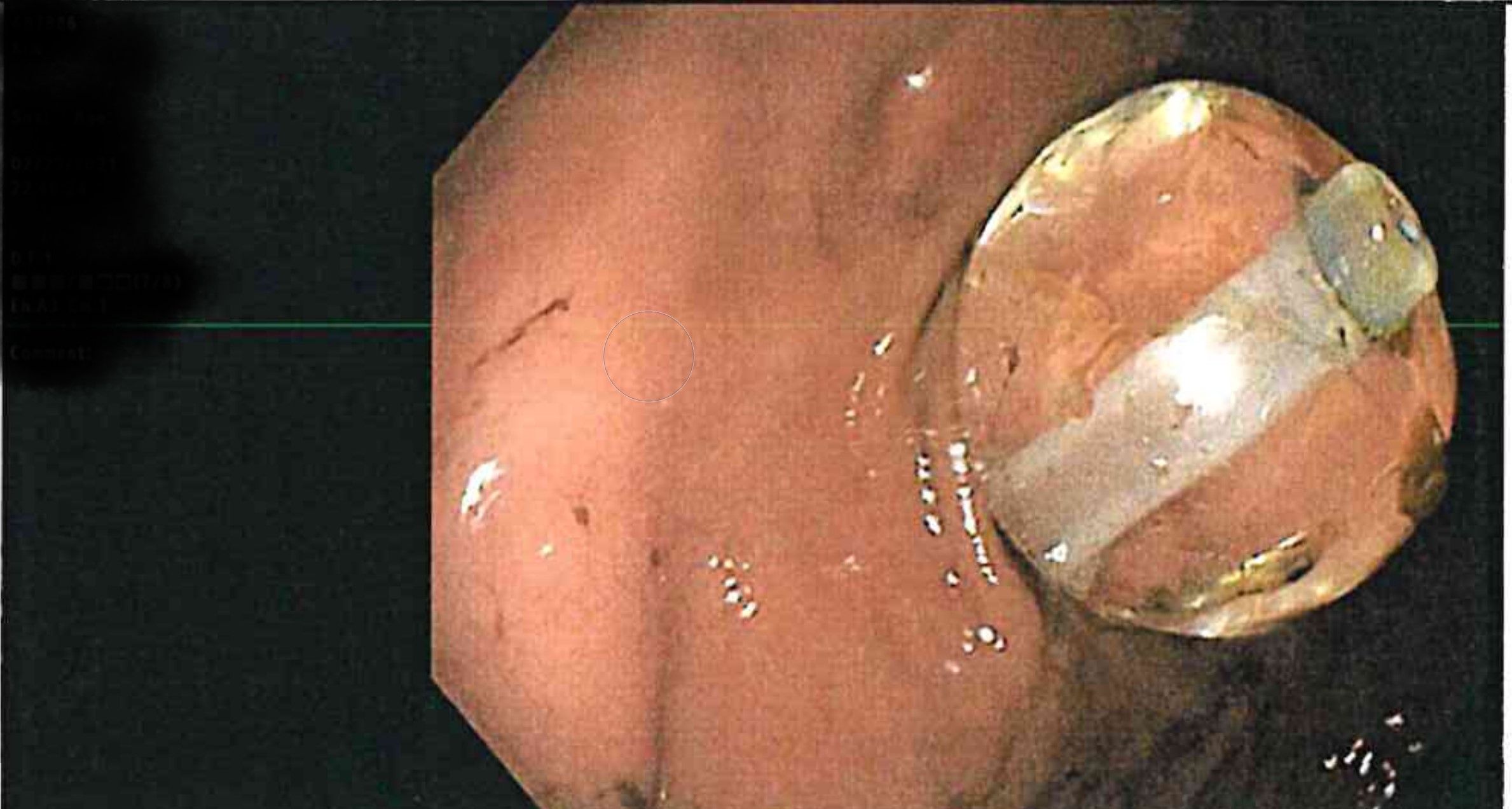