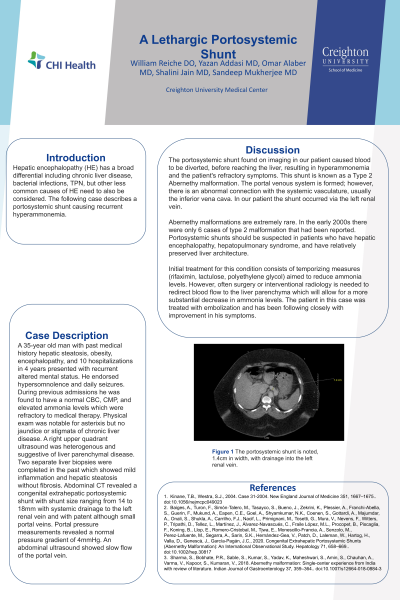 Introduction: Hepatic encephalopathy (HE) has a broad differential including chronic liver disease, bacterial infections, TPN, but other less common causes of HE need to also be considered. The following case describes a portosystemic shunt causing recurrent hyperammonemia.

Case Description/Methods: A 35-year old man with past medical history hepatic steatosis, obesity, encephalopathy, and 10 hospitalizations in 4 years presented with recurrent altered mental status. He endorsed hypersomnolence and daily seizures. During previous admissions he was found to have a normal CBC, CMP, and elevated ammonia levels which were refractory to medical therapy. Physical exam was notable for asterixis but no jaundice or stigmata of chronic liver disease. A right upper quadrant ultrasound was heterogenous and suggestive of liver parenchymal disease. Two separate liver biopsies were completed in the past which showed mild inflammation and hepatic steatosis without fibrosis. Abdominal CT revealed a congenital extrahepatic portosystemic shunt with shunt size ranging from 14 to 18mm with systemic drainage to the left renal vein and with patent although small portal veins. Portal pressure measurements revealed a normal pressure gradient of 4mmHg. An abdominal ultrasound showed slow flow of the portal vein.

Discussion: The portosystemic shunt found on imaging in our patient caused blood to be diverted, before reaching the liver, resulting in hyperammonemia and the patient's refractory symptoms. This shunt is known as a Type 2 Abernethy malformation. The portal venous system is formed; however, there is an abnormal connection with the systemic vasculature, usually the inferior vena cava. In our patient the shunt occurred via the left renal vein.

Abernethy malformations are extremely rare. In the early 2000s there were only 6 cases of type 2 malformation that had been reported. Portosystemic shunts should be suspected in patients who have hepatic encephalopathy, hepatopulmonary syndrome, and have relatively preserved liver architecture.

Initial treatment for this condition consists of temporizing measures (rifaximin, lactulose, polyethylene glycol) aimed to reduce ammonia levels. However, often surgery or interventional radiology is needed to redirect blood flow to the liver parenchyma which will allow for a more substantial decrease in ammonia levels. The patient in this case was treated with embolization and has been following closely with improvement in his symptoms. 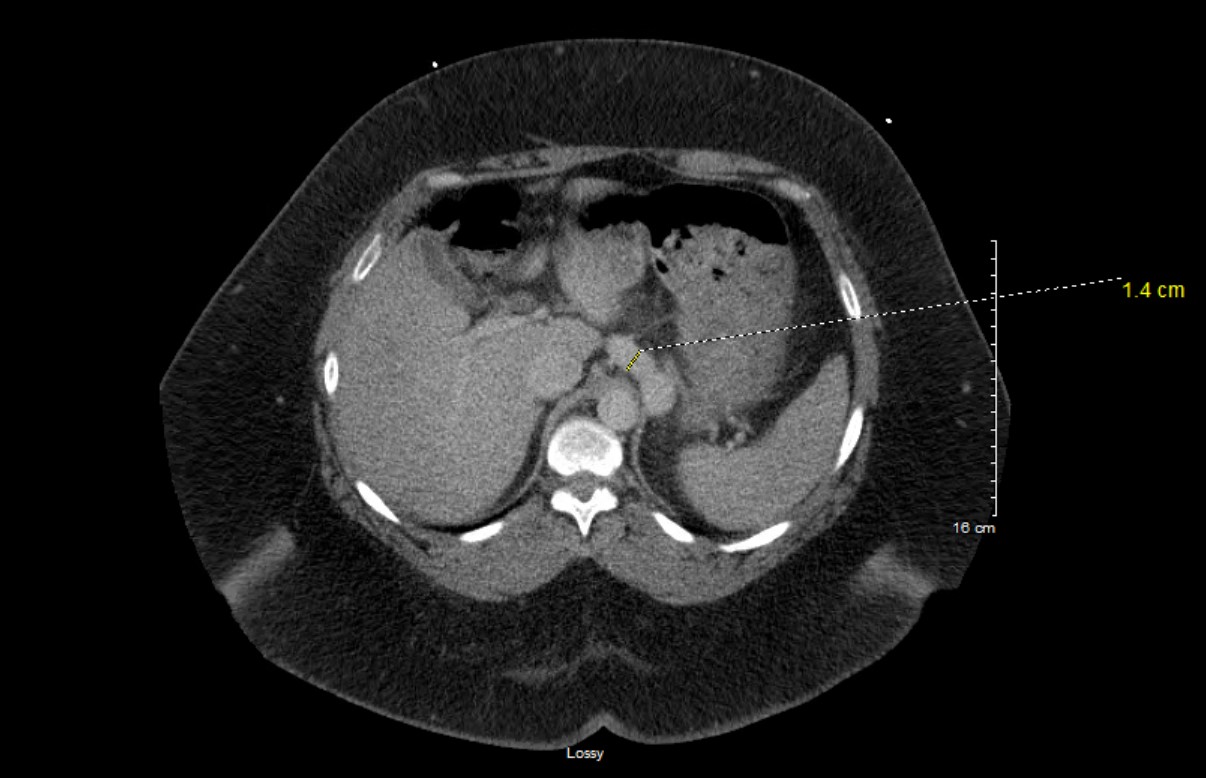 Figure: The portosystemic shunt is noted, 1.4cm in width, with drainage into the left renal vein.