P1881 - Coxsackie B Virus-Induced Liver Injury in an Immunocompetent Adult 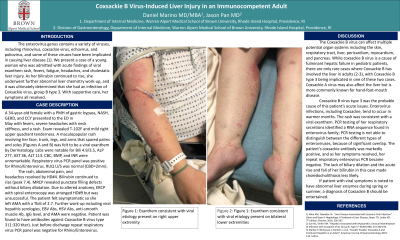 Introduction: The Enterovirus genus has been implicated in causing liver disease. Coxsackie B virus is a cause of fulminant hepatic failure in pediatric patients but very rarely involves the liver in adults, with Coxsackie B type 3 being implicated in one of the two reported cases. We present a case of a young woman admitted with acute findings concerning for viral infection and cholestatic liver injury likely due to Coxsackie virus, group B type 3.

Case Description/Methods: A 34-year-old female with a PMH of gastric bypass, NASH, GERD, and CCY presented to the ED in May with fevers, severe headaches with neck stiffness, and a rash. Exam revealed T-102F and mild right upper quadrant tenderness. A maculopapular rash involving her face, trunk, legs, and arms that spared palms and soles (Figures A and B) was believed to be a viral exanthem by Dermatology. Labs were notable for bilirubin 4.9/3.5, ALP 277, AST 36, ALT 113. CBC, BMP, and INR were unremarkable. Respiratory virus PCR panel was positive for Rhino/Enterovirus. RUQ U/S was normal (CBD=2mm).

The rash, abdominal pain, and headaches resolved by HD#4. Bilirubin continued to rise (peak 7.4). MRCP revealed punctate filling defects without biliary dilatation. Due to altered anatomy, ERCP with spiral enteroscopy was arranged HD#9 but was unsuccessful. The patient felt asymptomatic so she left against medical advice with a total bilirubin of 2.7. Further work-up including viral hepatitis serologies, EBV Abs, HSV Abs, anti-smooth muscle Ab, IgG level, and antimitochondrial Ab were negative. Patient was found to have antibodies against Coxsackie B virus type 3 (1:320 titer). Just before discharge repeat respiratory virus PCR panel was negative for Rhino/Enterovirus.

Discussion: Coxsackie B virus type 3 was the probable cause of this patient’s acute issues. Enterovirus infections occur in warmer months and the rash was consistent with a viral exanthem. PCR testing of her respiratory secretions identified a RNA sequence found in Enterovirus family. PCR testing is not able to distinguish between the different types of enteroviruses, due to significant overlap. The patient’s Coxsackie antibody was markedly positive, and as her symptoms resolved, her repeat respiratory Enterovirus PCR became negative. The lack of biliary dilation and the acute rise and fall of her bilirubin in this case made choledocholithiasis less likely. If a patient with viral symptoms is noted to have abnormal liver enzymes during spring or summer, a diagnosis of Coxsackie B should be entertained. 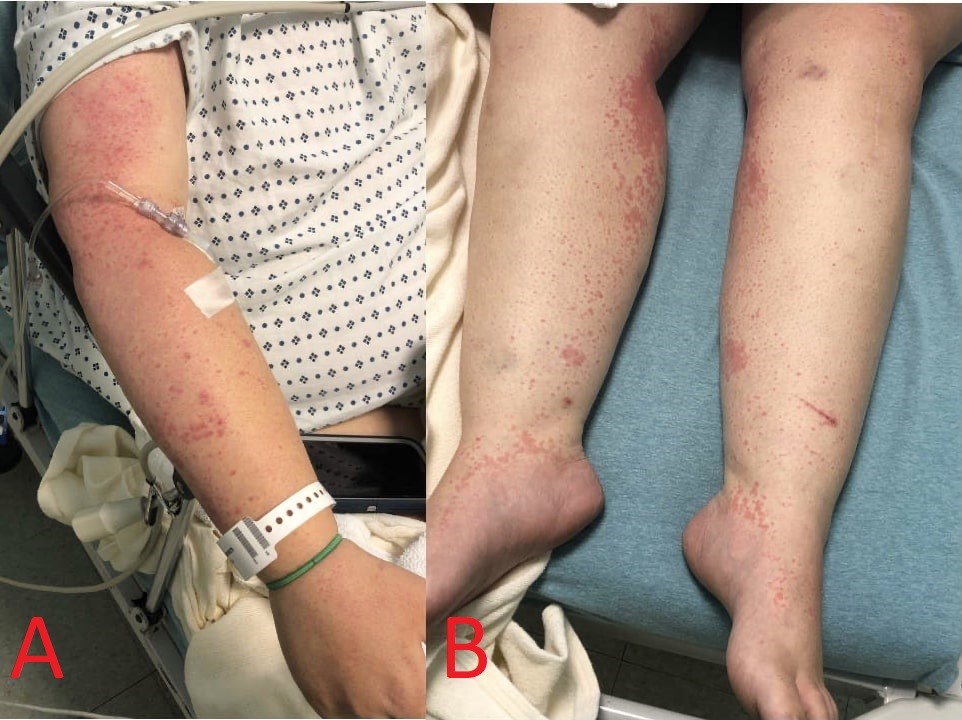