Introduction: The 4-hour (h.) gastric emptying scintigraphy (GES) protocol is the gold standard for assessing GE. Given its noninvasive nature and physiologic methodology, this study has become the optimal means to measure gastric emptying (GE), thereby diagnosing gastroparesis (delayed gastric empty, DGE) with the presence of gastric retention >60% at 2h. and >10% at 4h; dumping syndrome (classic rapid gastric emptying, RGE) with >30% gastric contents emptied by 30 minutes and >65% emptied at 1h. and >80% at 2h. As well as the new entity late-onset rapid emptying (LRGE). Which is a subset of RGE, based on criteria where hourly gastric emptying decrements exceed 49% between 2-3 h., and 28% between 3-4h.

We aimed to determine the percentage of patients diagnosed with an abnormal gastric emptying test who had unexplained postprandial gastrointestinal (GI) symptoms and previously had an extensive negative upper GI workup.

Methods: A retrospective review was conducted analyzing the GES results from a standardized 4h. radioisotope-labeled eggbeater meal (255 kilocalories) performed at an academic tertiary care referral center in patients with a spectrum of postprandial GI symptoms (nausea, vomiting, abdominal pain, fullness, urge to go the bathroom, and diarrhea) between Jan 2015 and March 2020 in the setting of having had extensive negative upper GI workup including CT abdomen, upper GI series, and endoscopies.

Discussion: (1) Utilizing a 4h. GE test, 62.3% of patients with unexplained postprandial upper GI symptoms were identified with either DGE or RGE and hence received appropriate treatment to address their symptoms. (2) Dumping syndrome presenting with RGE is an underestimated diagnosis being identified in 22% of our patients. (3) LRGE identified in 4% of our patients, is a new entity for explaining postprandial symptoms when the GES would have been interpreted as normal. 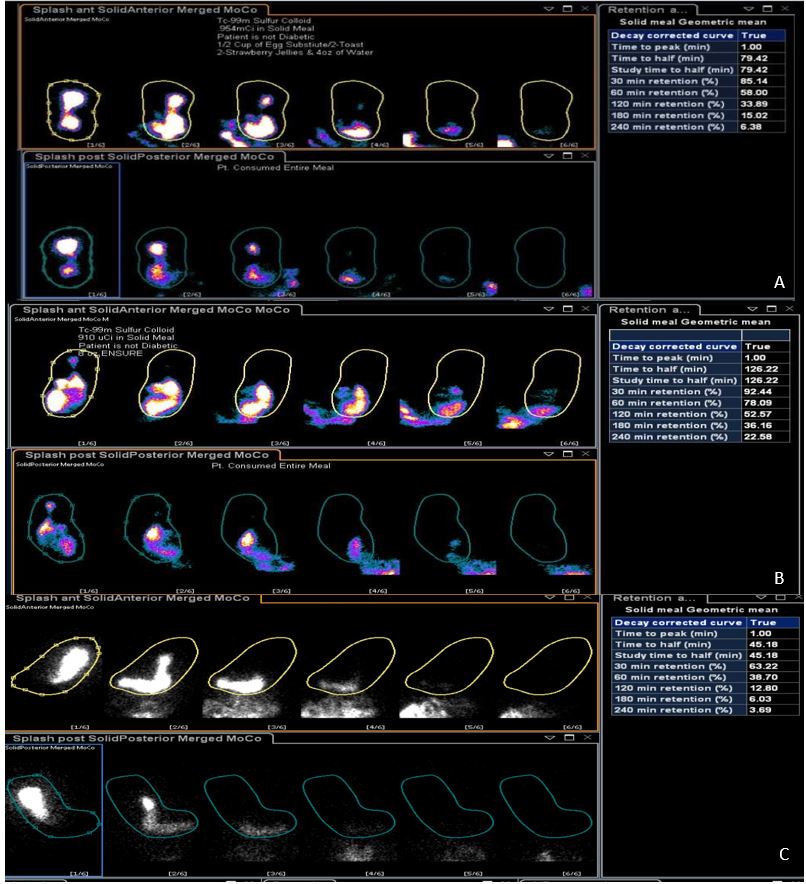