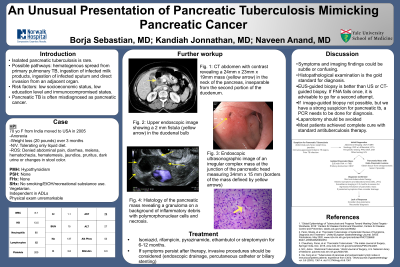 Introduction: Mycobacterium tuberculosis (TB) represents one of the major causes of death worldwide from an infectious agent. Generally this bacteria attacks the respiratory system; however, a small percentage of TB infections are extra pulmonary. Isolated pancreatic tuberculosis is rare, even in endemic countries. Pancreatic TB is often misdiagnosed as pancreatic cancer. It is important to accurately diagnose pancreatic TB as pharmacotherapy is effective and high risk procedures can be avoided.

Case Description/Methods: A 70-year-old woman from India presented with anorexia and weight loss. Her serologic workup revealed lymphopenia. A CT scan identified a 2.4 cm mass in the neck of the pancreas concerning for a pancreatic malignancy. A differential diagnosis of primary pancreatic adenocarcinoma, auto-immune pancreatitis and pancreatic lymphoma was considered. Upper endoscopy revealed a fistula with purulent drainage in the duodenal bulb. Endoscopic ultrasonography demonstrated a 3 cm mixed, solid and cystic, pancreatic mass invading into the duodenum and associated with lymphadenopathy. Fine-needle biopsy was positive for granulomas as well as acid-fast organisms consistent with M. tuberculosis. Our patient was started on anti-tuberculosis therapy. She had no evidence of respiratory involvement. She later tested positive for HIV.

Discussion: Primary isolated pancreatic TB is uncommon but occasionally seen in immunocompromised hosts. TB typically infects solid organs via hematogenous spread; however, direct spread from adjacent organs or lymph nodes has been reported. The available literature regarding primary pancreatic TB is limited. The majority of patients diagnosed with pancreatic TB are male in the fifth decade of life. Risk factors include a low socioeconomic status and an immunocompromised state. The pancreas is a hostile environment for M. tuberculosis due to the effects of pancreatic lipase and deoxyribonuclease. Therefore, isolated pancreatic TB is rare without a predisposing condition. Frequently reported symptoms include abdominal pain, fever, weight loss and jaundice. 80% of pancreatic TB cases manifest as pancreatic masses, often misdiagnosed as pancreatic cancer. EUS with FNA is the most effective method to obtain tissue and make the diagnosis of pancreatic TB. The gold standard therapy is the use of at least four anti-tuberculosis drugs for 6-12 months and is associated with a high cure rate. A minority of patients require surgery for abscess drainage. 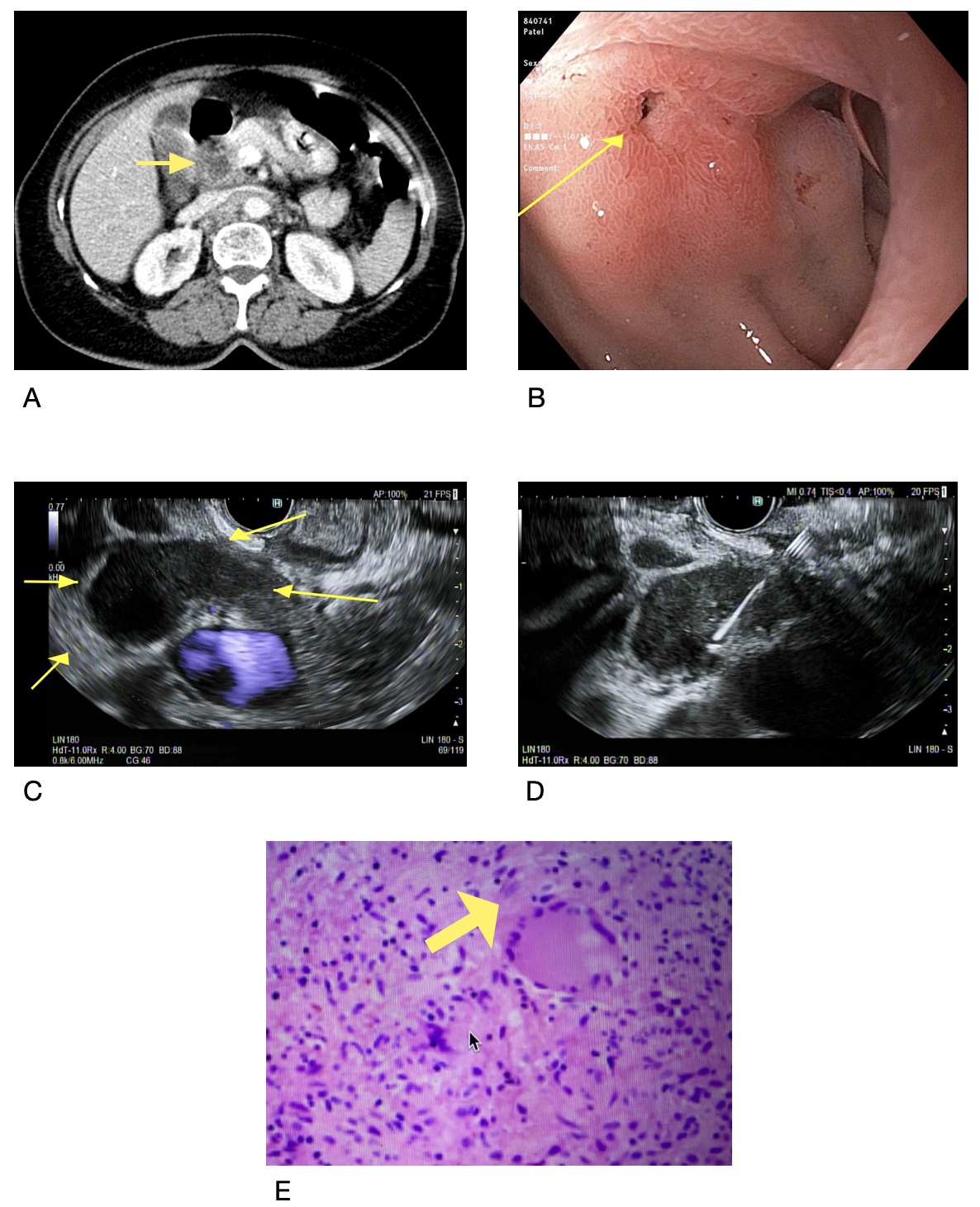