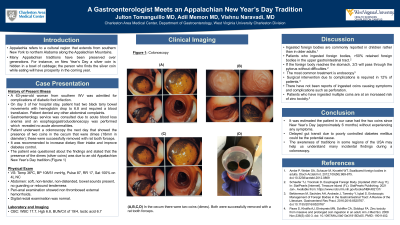 Introduction: Appalachia refers to a cultural region that extends from southern New York to northern Alabama along the Appalachian Mountains, with West Virginia (WV) as the only state located entirely within that range. Many Appalachian traditions have been preserved over generations. For instance, on New Year’s Day a silver coin is hidden in a bowl of cabbage; the person who finds the silver coin while eating will find prosperity in the coming year. The following case reports an unusual finding related to this tradition in a patient’s colonoscopy.

Case Description/Methods: A 63-year-old woman from southern WV was admitted for complications of diabetic foot infection. On day 3 of her hospital stay, patient had two episodes of black tarry bowel movements with hemoglobin drop to 6.8, requiring blood transfusion. Patient denied any other abdominal complaints. As a part of the work up for acute blood loss anemia, Gastroenterology service was consulted, and an esophagogastroduodenoscopy was performed that did not reveal any acute abnormalities. Additionally, the patient underwent a colonoscopy the next day that showed the presence of two coins in the cecum that were dimes (18mm in diameter); these were successfully removed with rat tooth forceps. No other abnormalities were noted. It was recommended to increase dietary fiber intake and improve diabetes control. The patient was questioned about the findings and stated that the presence of the dimes (silver coins) was due to an old Appalachian New Year’s Day tradition.

Discussion: Ingested foreign bodies are commonly reported in children rather than in older adults. Patients who ingested foreign bodies, more than 50% retained foreign bodies in the upper gastrointestinal tract. It has been estimated that if the foreign body reaches the stomach, 2/3 will pass through the pylorus without difficulties. The most common treatment is endoscopy, and 12% of patients required surgical intervention due to complications. There have not been reports of ingested coins causing symptoms and complications such as perforation. Patients who have ingested multiple coins are at an increased risk of zinc deficiency. It was estimated that the patient in our case has had these two coins for approximately 6 months since New Year’s Day without experiencing any symptoms. Delayed gut transit due to poorly controlled diabetes mellitus could be the potential cause. The awareness of traditions in some regions of the USA may help us understand many incidental findings during a colonoscopy. 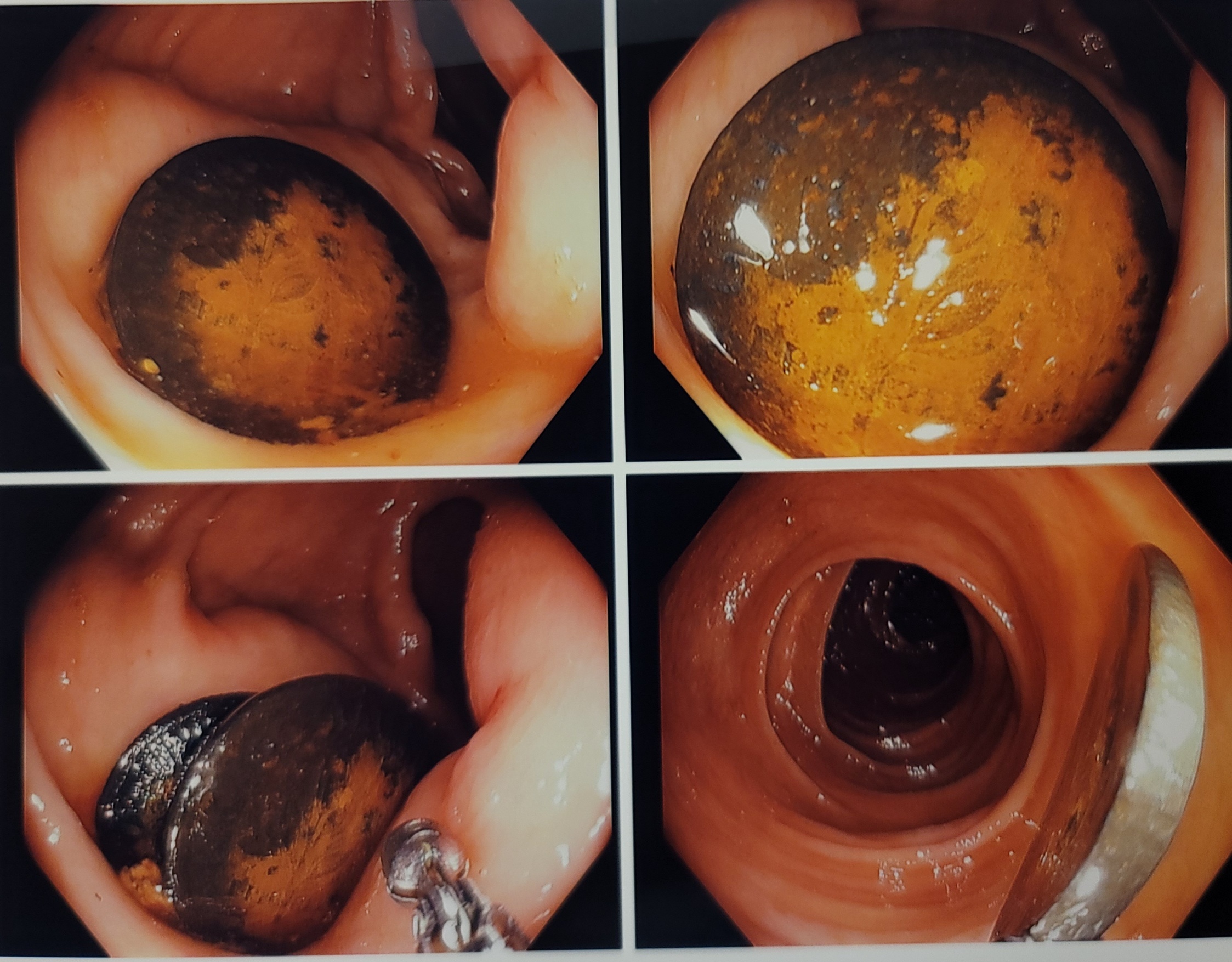