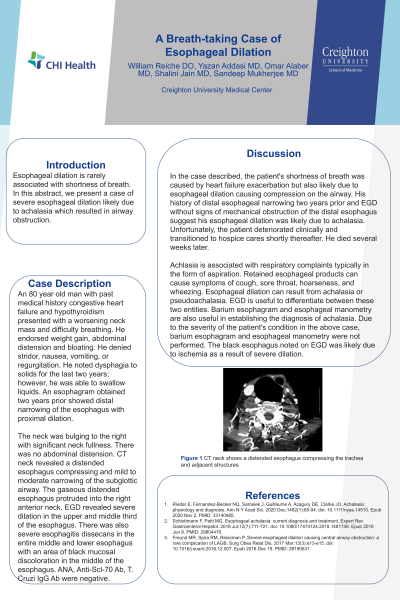 Case Description/Methods: An 80 year old man with past medical history congestive heart failure and hypothyroidism presented with a worsening neck mass and difficulty breathing. He endorsed weight gain, abdominal distension and bloating. He denied stridor, nausea, vomiting, or regurgitation. He noted dysphagia to solids for the last two years; however, he was able to swallow liquids. An esophagram obtained two years prior showed distal narrowing of the esophagus with proximal dilation.

The neck was bulging to the right with significant neck fullness. There was no abdominal distension. CT neck revealed a distended esophagus compressing and mild to moderate narrowing of the subglottic airway. The gaseous distended esophagus protruded into the right anterior neck. EGD revealed severe dilation in the upper and middle third of the esophagus. There was also severe esophagitis dissecans in the entire middle and lower esophagus with an area of black mucosal discoloration in the middle of the esophagus. ANA, Anti-Scl-70 Ab, T. Cruzi IgG Ab were negative.

Discussion: In the case described, the patient's shortness of breath was caused by heart failure exacerbation but also likely due to esophageal dilation causing compression on the airway. His history of distal esophageal narrowing two years prior and EGD without signs of mechanical obstruction of the distal esophagus suggest his esophageal dilation was likely due to achalasia. Unfortunately, the patient deteriorated clinically and transitioned to hospice cares shortly thereafter. He died several weeks later.

Achlasia is associated with respiratory complaints typically in the form of aspiration. Retained esophageal products can cause symptoms of cough, sore throat, hoarseness, and wheezing. Esophageal dilation can result from achalasia or pseudoachalasia. EGD is useful to differentiate between these two entities. Barium esophagram and esophageal manometry are also useful in establishing the diagnosis of achalasia. Due to the severity of the patient's condition in the above case, barium esophagram and esophageal manometry were not performed. The black esophagus noted on EGD was likely due to ischemia as a result of severe dilation. 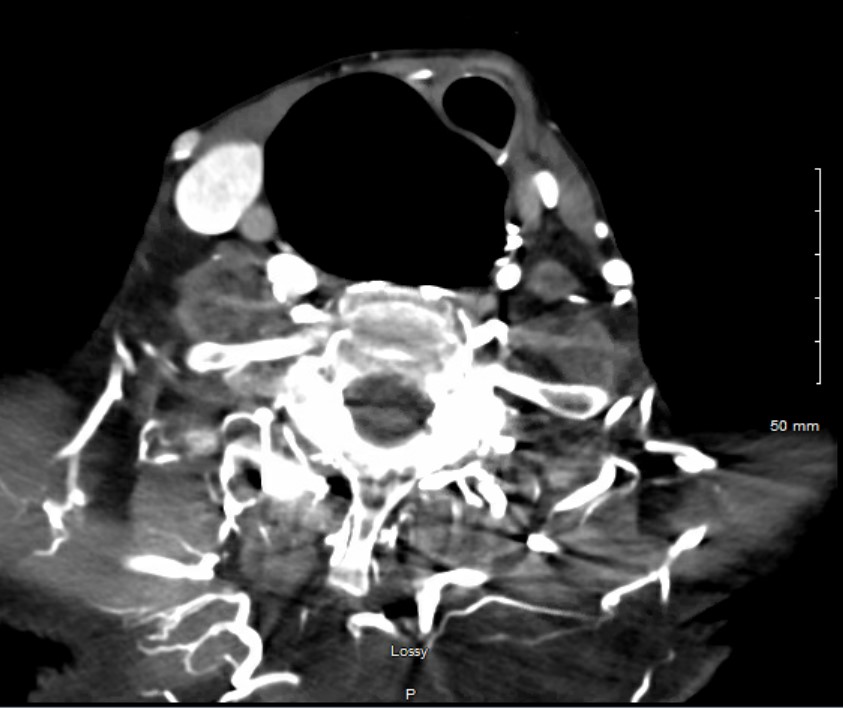