P0734 - When Your Lab Didn’t Read the Guidelines: The Ability of Physicians in a Teaching Hospital Clinic to Identify Abnormal Alanine Aminotransferase (ALT) Values 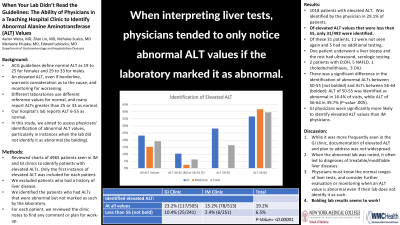 Introduction: ACG guidelines define normal ALT as 29 to 33 for males and 19 to 25 for females. An elevated ALT, even if borderline, warrants consideration as to the cause, and monitoring for worsening. However, different laboratories use different reference values for normal, and many report ALTs greater than 25 or 33 as normal. Our hospital’s lab reports ALT 6-55 as normal. In this study, we aimed to assess physicians’ identification of abnormal ALT values, particularly in instances when the lab did not identify it as abnormal (by bolding).

Methods: We reviewed the charts of 4965 patients seen in Internal Medicine (IM) and GI clinics to identify patients with elevated ALTs. Only the first instance of elevated ALT was included for each patient. We excluded patient who had a history of liver disease. We identified the patients who had ALTs that were abnormal but not marked as such by the laboratory. For each patient, we reviewed the clinic notes to find any comment or plan for work-up.

Results: Results are summarized in the chart and table. 1018 patients with elevated ALT and no history of liver disease were identified and included. Elevated ALT was identified by the physician in 29.1% of patients. Of elevated ALT values that were less than 55, only 31/491 were identified. Of these 31 patients, 11 were not seen again and 5 had no additional testing. One patient underwent liver biopsy. The rest had an ultrasound and serologic testing. After work-up, two patients were presumed to have alcoholic liver disease, 5 NAFLD, one was diagnosed with choledocholithiasis, and 3 were diagnosed with DILI. Furthermore, there was a significant difference in the identification of abnormal ALTs between 50-55 (not bolded) and ALTs between 56-64 (bolded): ALT of 50-55 was identified as abnormal in 16.4% of visits, while ALT of 56-64 in 39.7% (P-value .005). Of note, GI physicians were significantly more likely to identify elevated ALT values than IM physicians (see table).

Discussion: Physicians were more likely to identify an abnormal ALT if it was bolded. In both clinics, non-bolded ALTs were largely ignored. Amongst the patients whose non-bolded elevated ALT were identified, most received additional testing and were found or presumed to have modifiable etiologies. This study demonstrates the need for physicians to better familiarize themselves with normal ranges of liver tests, and consider the need for further evaluation or monitoring when an ALT value is abnormal even if their laboratory does not identify it as such. 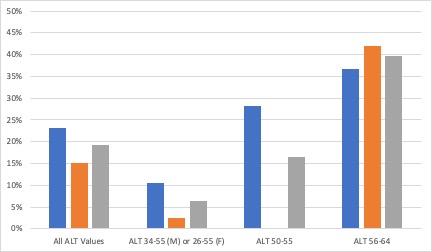