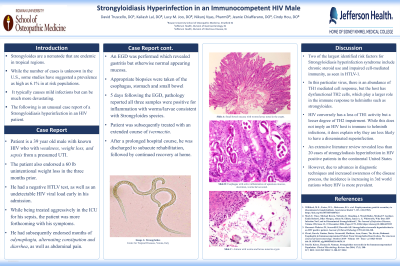 Introduction: Strongyloides are a neomatode that are endemic in tropical regions. While the number of cases is unknown in the U.S., some studies have suggested a prevalence as high as 6.1% in at risk populations. It typically causes mild infections but can be much more devastating. The following is an unusual case report of a Strongyloidiasis hyperinfection in an HIV patient.

Methods: Patient is a 39 year old male with known HIV who presented from his infectious disease office with weakness, weight loss, and sepsis from a presumed UTI. The patient had endorsed a 60 lb unintentional weight loss in the three months prior. He had a negative HTLV test, as well as an undetectable HIV viral load early in his admission. While being treated aggressively in the ICU for his sepsis, the patient was more forthcoming with his symptoms. He had subsequently endorsed months of odynophagia, alternating constipation and diarrhea, as well as abdominal pain. An EGD was performed which revealed gastritis but otherwise normal appearing mucosa. Appropriate biopsies were taken of the esophagus, stomach and small bowel. 5 days following the EGD, pathology reported all three samples were positive for inflammation with worms/larvae consistent with Strongyloides species. Patient was subsequently treated with an extended course of ivermectin. After a prolonged hospital course, he was discharged to subacute rehabilitation, followed by continued recovery at home.

Discussion: Two of the largest identified risk factors for Strongyloidiasis hyperinfection syndrome include chronic steroid use and impaired cell-mediated immunity, as seen in HTLV-1. In this particular virus, there is an abundance of TH1 mediated cell response, but the host has dysfunctional TH2 cells, which play a larger role in the immune response to helminths such as strongyloides. HIV conversely has a loss of TH1 activity but a lesser degree of TH2 impairment. While this does not imply an HIV host is immune to helminth infections, it does explain why they are less likely to have a disseminated superinfection. An extensive literature review revealed less than 20 cases of strongylodiasis hyperinfection in HIV positive patients in the continental United States. However, due to advances in diagnostic techniques and increased awareness of the disease process, the incidence is increasing in 3rd world nations where HIV is more prevalent. 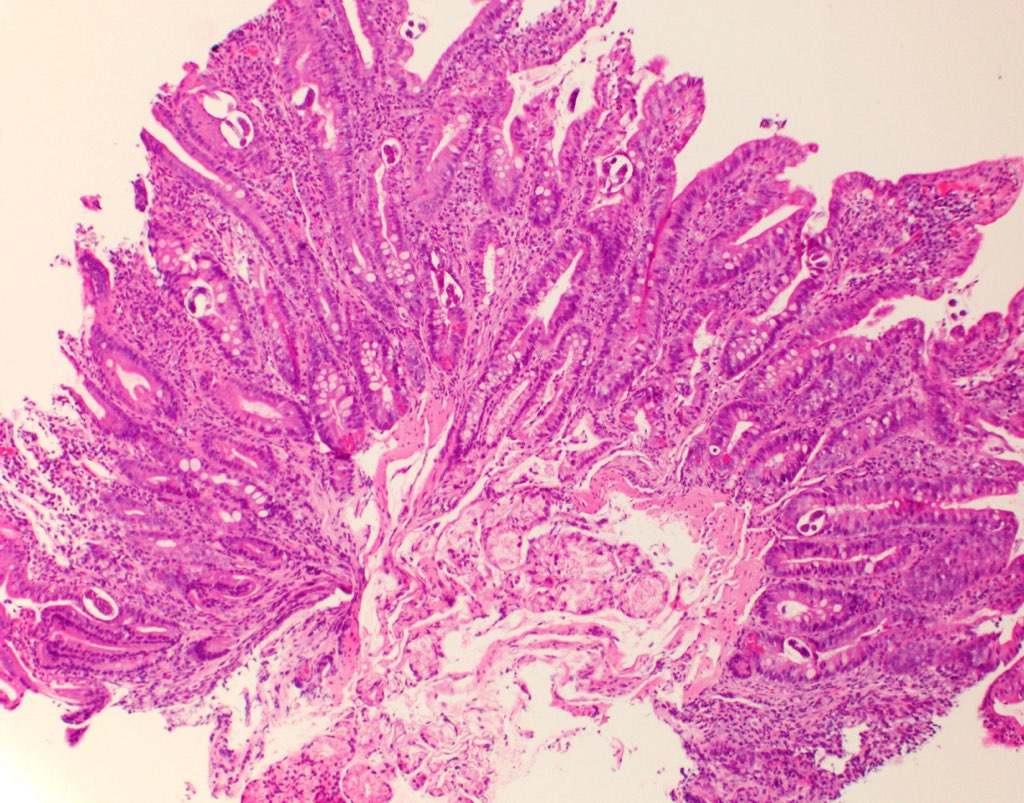 Small bowel mucosa with worms/larvae noted in the crypts. 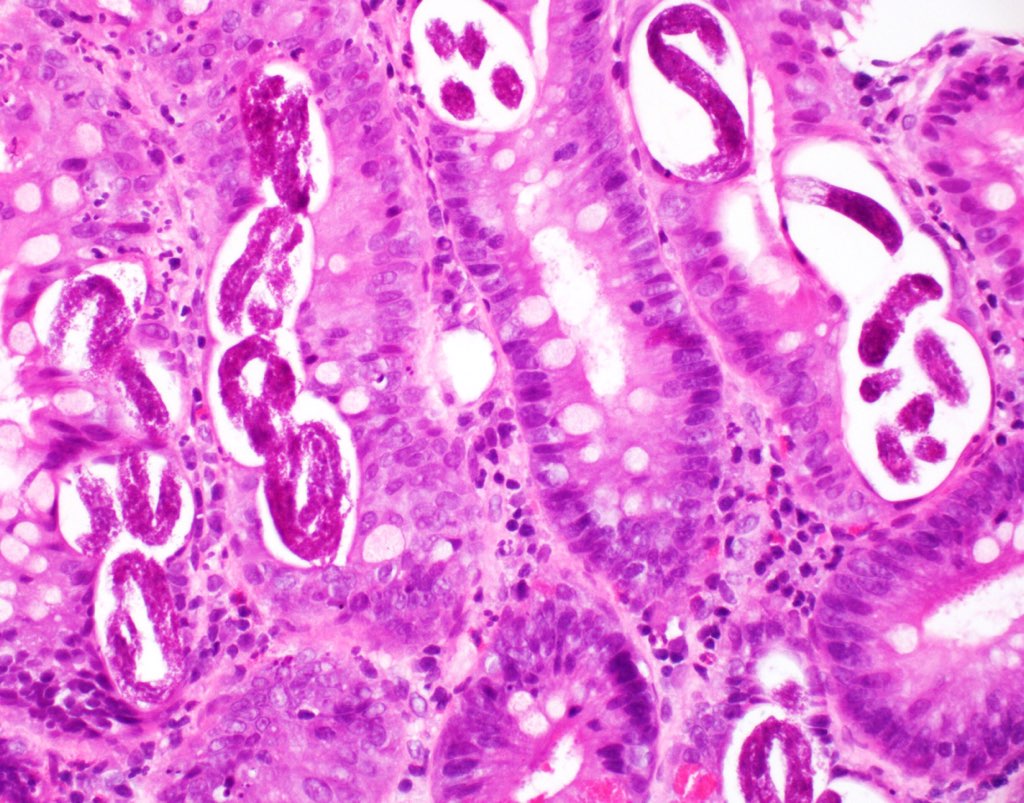 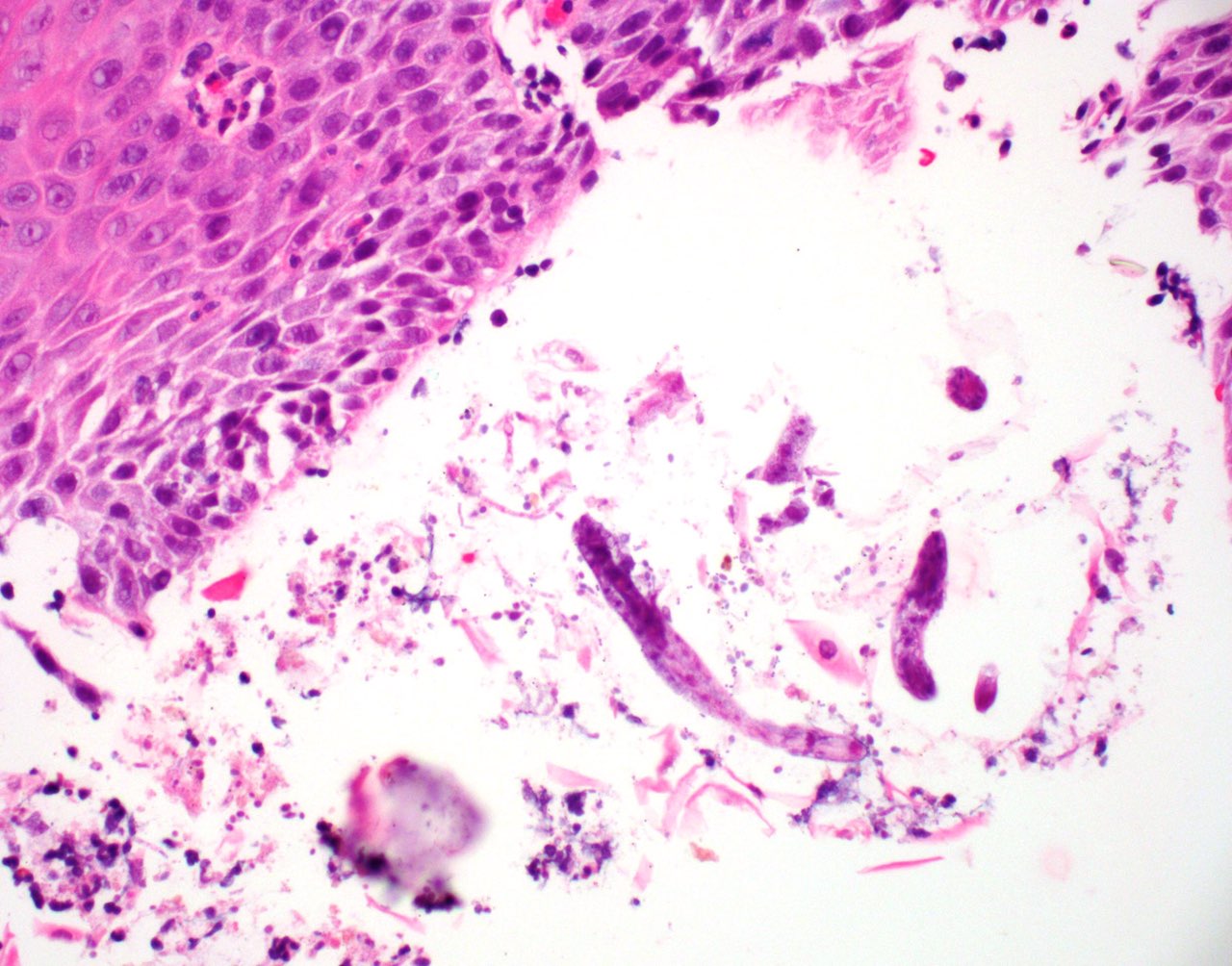 Antrum with worms/larvae noted in crypts.