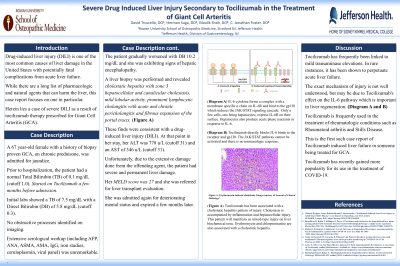 Introduction: Drug-induced liver injury (DILI) is one of the most common causes of liver damage in the United States with potentially fatal complications from acute liver failure. Herein lies a case of severe DILI as a result of tocilizumab therapy prescribed for Giant Cell Arteritis.

Methods: A 67 year-old female with a history of biopsy proven giant cell arteritis, on chronic prednisone and tocilizumab, was admitted for jaundice. Prior to hospitalization, the patient had a normal Total Bilirubin (TB) of 0.1 mg/dL (cutoff 1.0), however initial labs showed a TB of 7.5 mg/dL with a Direct Bilirubin (DB) of 5.8 mg/dL (cutoff 0.3). Patient was initially thought to have acute hepatitis. However, imaging revealed no obstructive processes and an extensive serological workup (including AFP, ANA, ASMA, AMA, IgG, iron studies, ceruloplasmin, viral panel) was unremarkable. The patient gradually worsened with DB 10.2 mg/dL and she was exhibiting signs of hepatic encephalopathy. A liver biopsy was performed showing cholestatic hepatitis with zone 3 hepatocellular and canalicular cholestasis, mild lobular activity, prominent lymphocytic cholangitis with acute and chronic pericholangitis and fibrous expansion of the portal tracts. These finds were consistent with a drug-induced liver injury (DILI). At that point in her stay, her ALT was 778 u/L (cutoff 31) and an AST of 346 u/L (cutoff 31). Unfortunately, due to the extensive damage done from the offending agent, the patient had severe and permanent liver damage. Her MELD score was 27 and she was referred for liver transplant evaluation. Despite these measures, her overall clinical picture was poor from extensive comorbidities and ongoing hepatic encephalopathy. She was admitted again for deteriorating mental status and expired a few months later.

Discussion: Drug induced liver injury due to Tocilizumab is a rare complication. Although a few case reports exist of Tocilizumab leading to liver injury in patients with Rheumatoid Arthritis and Still’s disease, we have found no cases thus far in a patient with Giant Cell Arteritis. The exact mechanism of injury is not well understood, but may be due to Toculizimab’s effect on the IL-6 pathway which is important in liver regeneration. Health care professionals should be aware of the hepatotoxic potential associated with Tocilizumab, especially during the current time period, given it’s prevalent use for SARS-CoV-2. Prompt recognition, monitoring of liver function tests and drug discontinuation are imperative.